The Mexican Revolution, a civil war that raged from 1910 to 1920, ousted the hated dictator Porfirio Díaz and created a new era with the government being in the hands of the people.

Out of this revolution a the Muralism Movement grew. These publicly-funded murals were painted with the theory that by making ‘educational’ art available to everyone, they had the power to transform society.

One of the best-known muralists was Diego Rivera, although he is possibly better known as the husband of Frida Kahlo.

Where to see Diego Rivera in Mexico City.

(Free but you need to surrender photo ID such as a passport or driver’s license, one per group.)

Mural of the history of Mexico by the famous muralist Diego Rivera in in the National Palace in Mexico City.

This is a close up of one tiny piece of this mural, showing the Mayan using cocoa beans to buy corn.

An earlier set of faded murals in the Secretaría de Educación Pública. This one is of women washing and drying clothing. 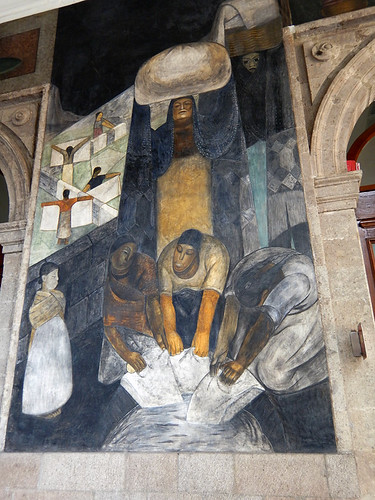 Diego usually puts a portrait of himself, and sometimes his wife Frida, in many of his murals. 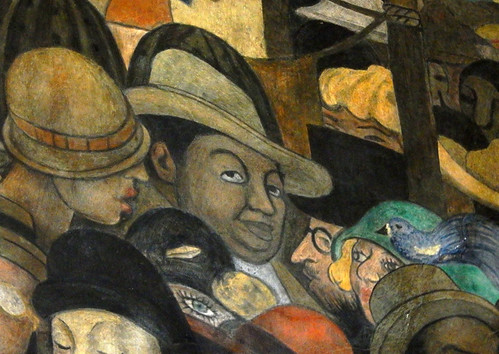 Murals by Rivera on an upper floor in the Palacio de Bellas Artes include a 1936 fresco mural by Diego Rivera called ‘Carnival of Mexican Life’ (Carnaval de la vida mexicana). 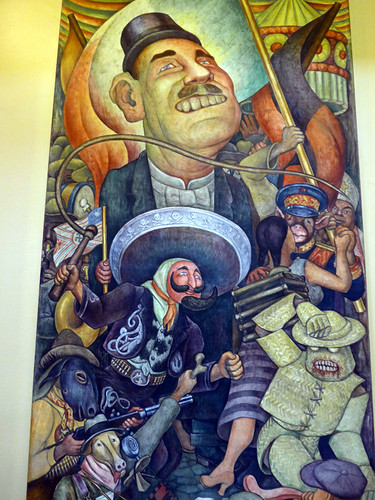 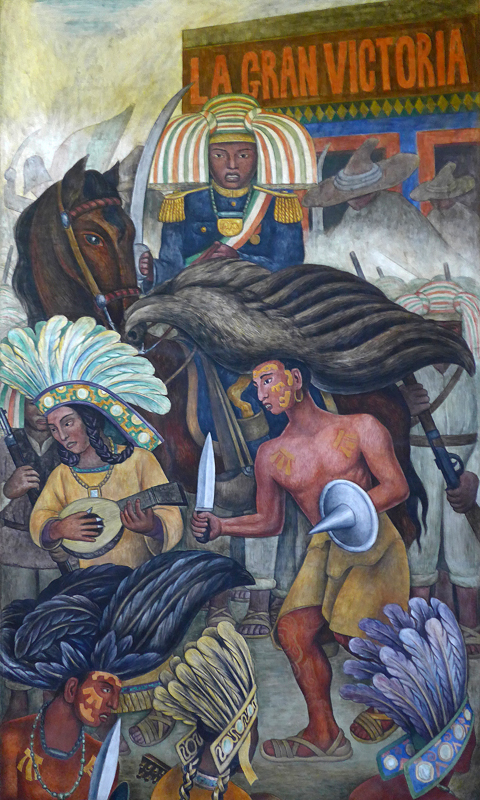 The small Museo Mural Diego Rivera primarily contains a large 45-foot-long mural rescued from a hotel that was severely damaged in the 1985 earthquake. The mural is called ‘Dream of a Sunday Afternoon in Alameda Park’. I was there years ago and we weren’t allowed to take photos at the time so this image is courtesy of Wikipedia.

At the far left of the map is the small Museo Mural Diego Rivera, containing the large mural called ‘Dream of a Sunday Afternoon in Alameda Park’. The green area directly to the right of the museum is Alameda Park, something to stroll through either before or after you go to the museum. At the other end of the Alameda Park is the Palacio de Bellas Artes (with faint blue text), which has significant Rivera murals on the second floor. The Secretaria de Educación Public is near the top on the right and at the far right in the middle is the Palacio Nacional (grey text).

Much less known is Fuente de Tlaloc, a Bosque de Chapultepec II Sección (in the park), a fountain and waterworks feature designed by Diego Rivera. 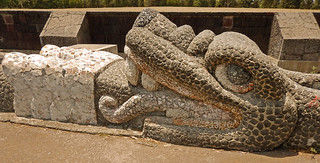 2 responses to “The Mexican Muralist Diego Rivera in Mexico City”