This decorative painted style, very popular in Buenos Aires, is called ‘Fileteado Porteño’, ‘porteños’ being what the inhabitants of Buenos Aires call themselves.

The colourful style, with its painted swirls and swashes, began appearing on horse-drawn carriages in the early 20th century and was later transferred to cars and buses. The paintings became more elaborate, adding flowers and often scenes of the city, especially those to do with tango, the iconic dance of Buenos Aires. 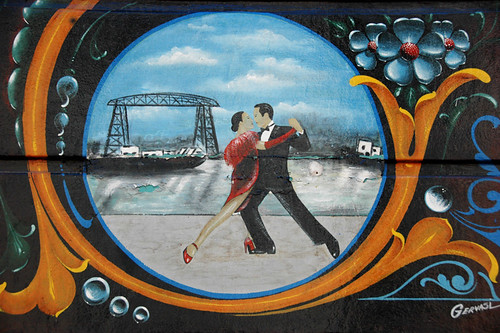 The ribbons and banners represent the blue and white stripes of the Argentinean flag. The ‘Barrio de tango’ is La Boca, where tango was born. I see many of my favourite filetes, the ones with the richest colours, are signed Gervasi, who has his own Facebook page if you would like to see more of his work. 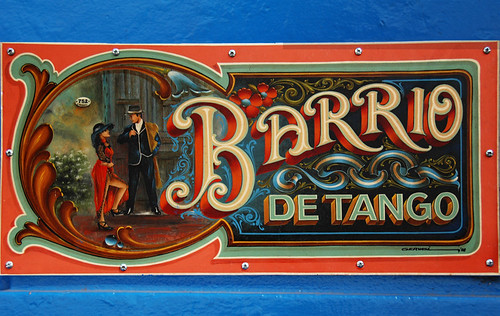 A café in La Boca with tables painted ‘fileteado’, and more blue and white ribbon banners. 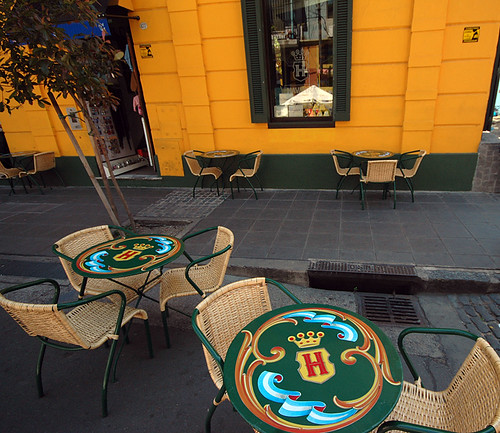 This distinctive style also shows up in and around Corrientes which Carlos Gardel, the famous tango singer, called home.

Gardel was the man who first put words to tangos creating a sensation around much of the Americas and Europe. 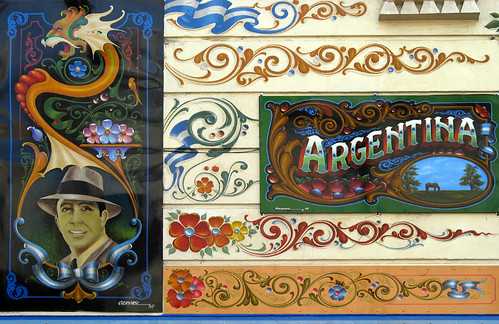 This great tango singer shows up on many filete murals in this barrio (neighbourhood) along with many other murals.

His name adorns street names and this ‘subte’ stop with another fileteado mural.

El Zorzal Criollo (the Creole Songbird, specifically a Thrush) was another name for Gardel. 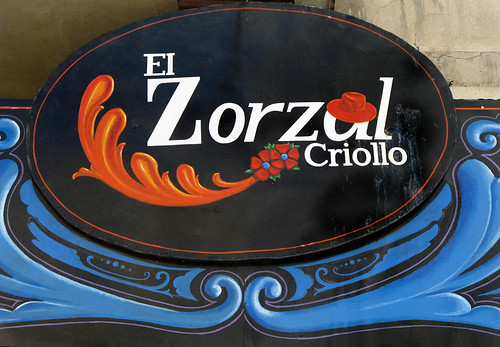 Below is my hand-drawn (and wildly inaccurate) map of our Corrientes and Carlos Gardel tour that we attempted to film in Buenos Aires in 2008.  It starts by taking a taxi with the two-member crew to the Casa Museo Carlos Gardel on Calle Jean Juarés (bottom right). This was a bit of a disaster as one member was sick that day, but we managed to carry on. Al took a ton of photos to accompany the videos – none of mine show up as my camera was grabbed right out of my hands by a ladrón in La Boca the day before!

On my map these houses are on Callejón Zelaya but everywhere else describes them as being on Calle Jean Jaurés, the same street as the Casa Museo of Carlos Gardel. Commissioned in 2004, this street of colourful fileteado houses is a delight. 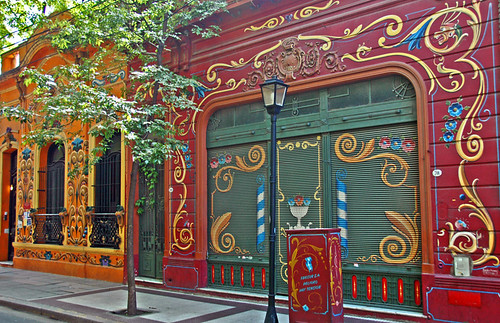 It appears that you need to have wildly-coloured cars as well if you plan on living in this street!

Another house in this neighbourhood featuring a blue and white striped ribbon and, if you look carefully, an Argentinean flag in the window for comparison.

3 responses to “Fileteado Porteño, a Style of Painting from Buenos Aires”