From Manzanillo we took a 7 1/2 hour bus ride to Lázaro Cárdenas and took off the next morning on the 11:00 bus for Zihuatanejo.

The bus ride to Zihuatanejo was only two and a half hours long. On the bus one woman kept her hands busy embroidering a panel. 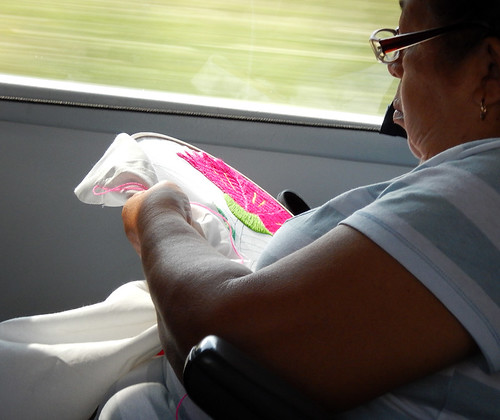 We stayed at a charming hotel recommended by a friend, but we have been sworn to secrecy by all the other residents who want to keep it from being overwhelmed! Initially we were not so sure about its location, being a fair distance from the town centre where we had stayed 20 years earlier. 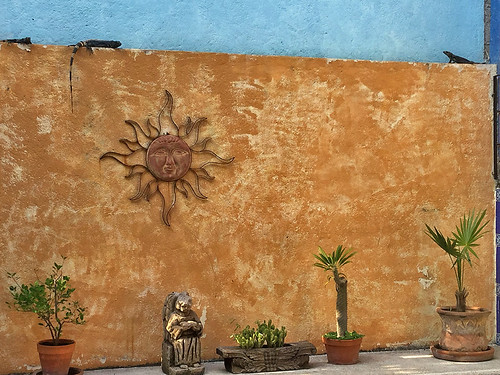 Back then Zihuatanejo was a small fishing village. There were only two main streets at the time; one that ran along the Playa Principal (main beach), and another that ran at a right angle to it. This was the view of the beach from Elvira’s where we had stayed.

Steep rock formations divided the Playa Principal from the Playa Madera, the next beach over, where our 2019 hotel was located. Back in 1999 you had to climb up the rocks and over to the other side to get to that beach. This trip we were delighted to discover a new malecón, a walkway along the water, which connected Madera beach with the older centre of the town.

The malecón ran through intriguing rocky formations that had been landscaped with desert plants, and students provided painted signs with ecological reminders. All along the way were beach cafes and restaurants.

Coming into the town we passed this fisherman who was hauling a Dorado, the greenish fish, and Velas, a small type of sailfish. Two other guys sitting there kept asking him, “¿Cuántos?” (how much?); looked like he would have no problem selling them. 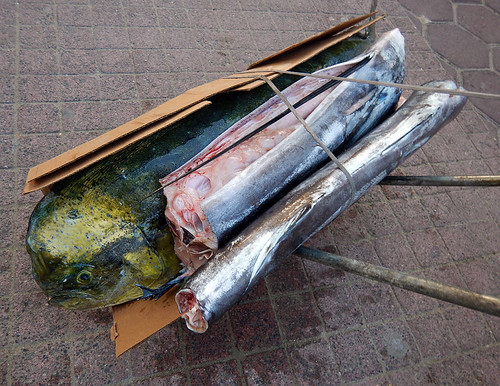 In the ‘downtown’ area preparations were on for Christmas.

We stopped in at Elvira’s where we had stayed 20 years before, and it was still the same, even the rooms in the back, not surprising as their sign said they were established in 1956.

For Elvira’s the biggest change was that previously the restaurant had looked over the water, and now they looked over a much less attractive semi-permanent market made of concrete. It was Al’s birthday so we stopped there and had a Margarita and guacamole con totopos.

Further along Al was thrilled to find a small café that served Capricho, an IPA, a cerveza artesanal that was actually brewed in Zihuatanejo. He accompanied this with hot wings, another one of his favourite meals. All that was missing from his birthday celebration was ice cream which we didn’t find until we were on the beach the next morning!

Google Map of Zihuatanejo and its beaches. 20 years earlier we had stayed at Elvira’s, near the Muelle Zihuatanejo, the town pier. This time we stayed near Playa La Madera, where we spent the next day, and the day after we went to Playa La Ropa, a long swath of sand which was totally new to us.

7 responses to “Off to Zihuatanejo in Mexico 20 Years Later”