In 2018 Al & I headed to Denmark and Sweden with the idea of meeting up with my aunts and uncles and cousins, and also to track down some of the places in my Dad’s stories.

It was an unusually hot summer that year and for sure we got into Scandinavian ice cream, a great way to cool down. 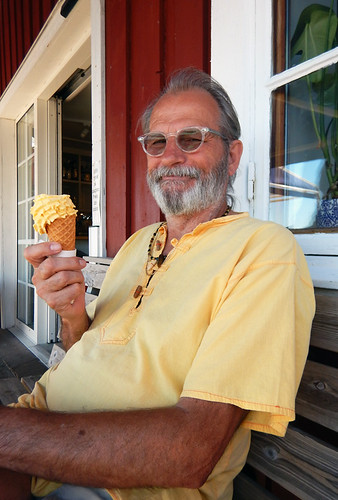 Since my dad grew up in a dairy and made a lot of ice cream in his life, my cousin and I managed to track down the place where he was born.

Dairy in Langeland, Denmark where my dad lived from 1921-31.

“At that time in my childhood, when winter came, crews of men belonging to cooperatives broke up the ice on the ponds and hauled it to large, underground cellars where it was used for refrigeration, the only kind known at that time. The ice was insulated on top with several feet of straw bales and would last all year.

Milk and ice cream was often kept in wooden buckets with ice and salt as the salt would decrease the temperature.”

1927 or so: A photo of my dad (right) and his twin brother Knud (left) together with their dad dressed in his ‘milkman’ clothes near the dairy in Nordenbro.

At some point in the past the dairy had been converted to a house, and the chimney stack removed.

“My dad went independent by buying a creamery [in Aarhus]. He bought milk from independent farmers, and bottled and distributed the various products to small stores.

The name of the creamery was Trøjborg, a fancy name for an industrial building in the middle of a bunch of five-storey apartment buildings.”

“Money problems with the creamery had our dad changing tactics and selling the milk wagon horses, four of them, that we boys had fed and groomed. He bought a van for delivery, also doing away with four wagons.”

Co-op Dairy milk wagon in the Danish History Museum in Copenhagen, Denmark. This would have been hauled by horses in a time before trucks came into wide-spread use. 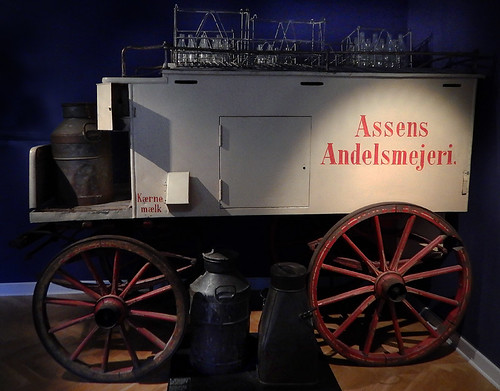 I never thought to try and track down the creamery in Aarhus when I was there in 2018 but remember touring a creamery the previous time I was in Denmark in 1965, and my dad saying that it used to be his dad’s creamery. At the creamery we tried a number of things, the Danish equivalent of clotted cream (which I loved), and ice cream of course, which I found to be astonishingly rich, way too rich for me.

Dad’s painting of Arctic Ice Cream in Vancouver, 1951. I found Dad’s description of the processes confusing so I’m not sure what they are doing in the middle, but to the left they appear to making chocolate-covered ice cream sticks.

Arctic Ice Cream in Vancouver, where dad got a summer job based on his experience in Denmark.

“Being familiar with dairy machinery I quickly caught on despite the new developments in technology in the intervening 15 years. Of course the new technology was designed to water down the product and simplify the range of products, to achieve economy of scale for the greatest profit, so what else is new?

Back in Denmark in the dirty thirties our emphasis was on customer satisfaction with a large variety of real fruits and high fat creams and egg white for smoothness.”

Here they were replaced with cheaper substitutes such as guar gum for smoothness and low fat creams. The homogenizing and cooling equipment when whipping helped as well; I heard that in the US they had developed methods for making fake ice cream from seven percent milk.”

Anyway, the next hot summer day I think I’ll go out and get me some of that watered-down Vancouver ice cream!

14 responses to “Tracking Down the Past: Making Ice Cream (Denmark & Vancouver)”