As we walked from our hotel to the river the usual gang of Bangkok tuk-tuk drivers vied for our attention. Al laughingly fended them off, pointing at the terminal, saying, “We’re going on the ferry.’’

“No ferry today,” said one.

Neither of us believed him; we’d heard that one before. Besides, there weren’t any notices of closure at the terminal. But oddly, there was no one there, not a single attendant.

Then we heard there was to be a Royal Barge procession to mark the 80th birthday of King Bhumibol (Rama IX) which was coming up on December 5. The ferries were shut down because there was a dress rehearsal for the procession which was going to happen in 20 minutes or so.

Apparently this procession has only taken place 17 times in the last century so this 2007 rehearsal was a very unique event.

Many of the barges were very elaborate and the costumes date back a few centuries. 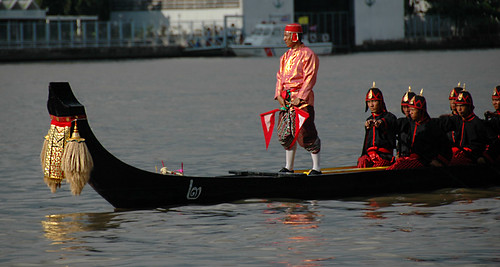 The boats (barges) were very long for the most part, and hard to fit in to a single photo.

I took a videos with my brand-new first-ever digital camera. The video is tiny, one quarter the size of standard TV size but it’s worth watching just to hear the eerie drumming and chanting. Seconds after posting it I got this comment: “Wow, this is classic & rare to find!”


The crowds were mostly dressed in yellow, the king’s colour.

We met Mary Wan, who here shows off her special yellow shirt that commemorates both the king’s birthday and the Royal Barge procession. She told us that we should go to the museum/docks where the barges were housed so we could see these amazing longboats up close.

Six weeks later we were back in Bangkok and took the ferry across the river to this temple. From there we were able to walk to the museum/dock.

Figurehead on a long boat, up close in the museum where they keep the King’s Barges docked. 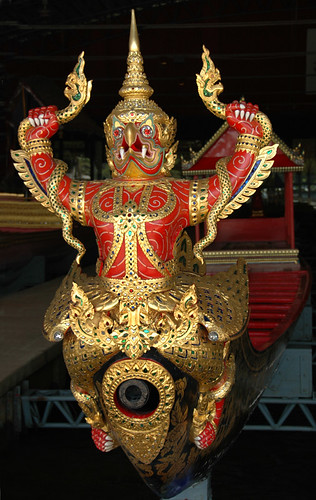 This boat with this figurehead out on the river Chao Phraya.

A different figurehead from behind.

In Hindu mythology, the god Vishnu rides on the back of an eagle known as Garuda. Although the Thais are primarily Buddhist, many of the Hindu gods appear on these ceremonial boats. 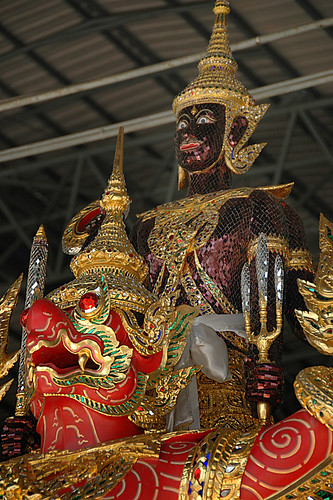 I think this is a monkey god, functioning as the figurehead on a different boat. 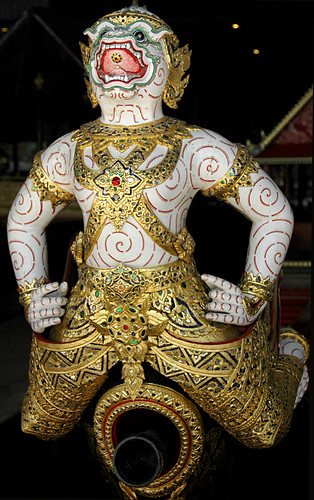 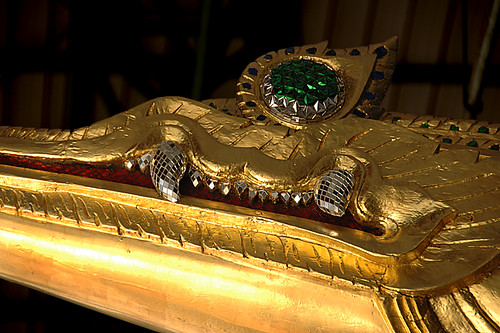 The painted pattern on the boat. 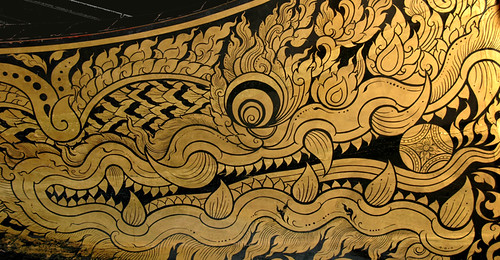 More of Cee’s Fun Foto Challenge: Anything to do with boats.