Corn (maíz) was the basis of agriculture in all of Mesoamerica. The Aztecs had a corn god called ‘Centeotl’; the Mayan’s ‘God of Maize’ was called Yum Kaax. He was usually depicted as a young man with yellow skin and a headdress of corn. Incidentally, when I asked why the skins of the chickens in Mexico were so yellow, they told me it was because they had been fed corn.

The Mayans have a legend of how their people were born of corn. In Mérida’s Palacio del Gobierno (Government Palace) this story is shown in a mural by artist Fernando Castro Pacheco. And if you happen to be there there are a whole series of stories from the Yucatán.

In Mexico City you can find this Diego Rivera mural of a Mayan buying maíz with granos de cacao, cocoa beans, the currency of the time. Note all the different colours of corn available.

One of Diego Rivera’s murals in the Secretaría de Educación Pública shows the Mexicans making a cross of corn. 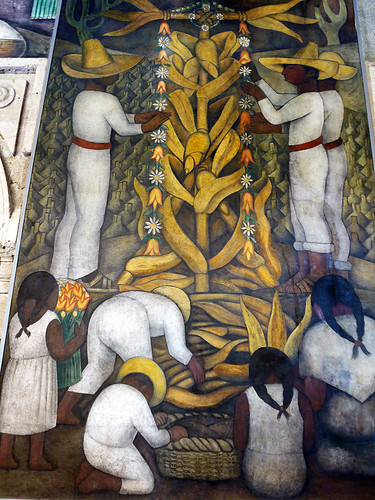 ‘Without corn there is no country; no to genetically modified corn / Sin maíz no hay paíz; No a transgénicos’

In Mexico you can always find small stalls selling ‘corn on the cob’, smeared with crema fresca, sort of like sour cream but not as sour, with a sprinkle of chile powder on top. Corn sold this way is known as elotes.

You can also find corn niblets in soups such as sopa de elote (corn soup) and sopa de milpa (garden soup). A milpa is what the Mayans called a small field containing a mix of complementary crops such as corn, beans, tomatoes and squash.

Corn with an exquisite fungus called huitlacoche in the market in Xochimilco. This is a special treat; see if you can find tacos with them inside. 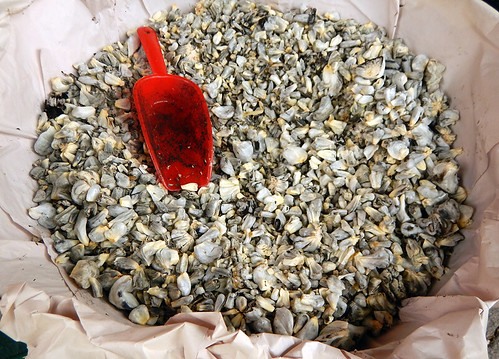 But the majority of corn is ground up to make masa, corn flour. Traditionally the corn kernels were boiled with powdered limestone (pure calcium, an alkaline mix) which causes the corn to soften and also to release its amino acids and vitamin Bs. 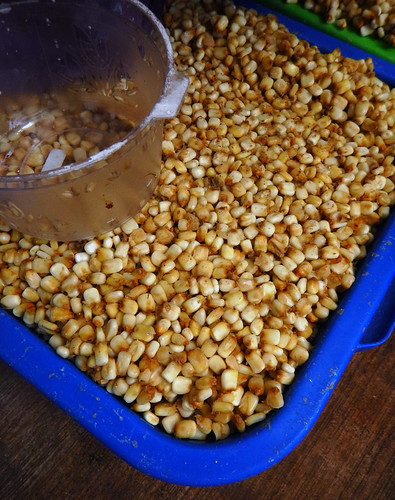 This process is called ‘nixtamalization’, and it appears the ancients knew that without this process the corn would not provide optimal nutrition. Nixtamalization also made it easier to grind the corn on a metate, the traditional method of grinding.

Once ground the corn flour is mixed with water to form a masa dough that is used for Mexican treats such as tortillas and tamales.

5 responses to “Corn, the Base of Mexican Life”