Poinsettias are native to the tropical highlands of Mexico.

In the wild they grow into 10-foot-high bushes with explosions of flamboyant red flowers appearing around the time of the winter solstice, a significant date for the ancient Aztecs. They called these plants Cuetlaxóchitl, and used the flowers to make a reddish dye, the milky white sap of the plant to reduce fevers, and the plant as an offering to Tonantzin, the mother goddess of the earth. 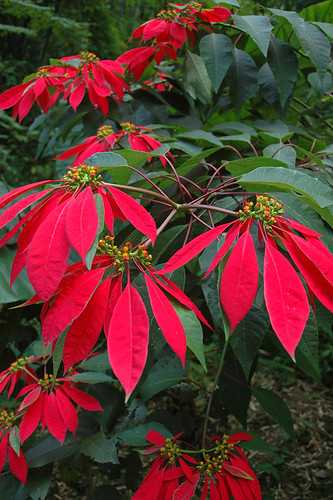 When the Spanish arrived in the Aztec homelands with their guns and crosses they were also struck by its December timing, and the star-shape of flower that to them resembled the Star of Bethlehem, and so they called it ‘la flor de Nochebuena’, the Flower of the Holy Night, the Christmas Eve flower. 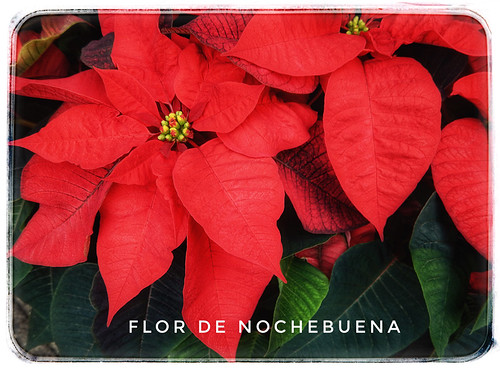 And so the Solstice celebrations became Christmas celebrations, and the Aztec goddess Tonantzin became the Virgin Mary.

There is a story in Mexico about two poor children, having nothing to give to the new-born Christ Child, picked a bunch of weeds besides the road. When they were presented to the child the weeds burst into red flowers, and so another Christmas legend was born.

Another story of this red flower is that of Joel R. Poinsett, the first American ambassador to Mexico in 1825. An amateur botanist, he sent the plants he had collected in Mexico back to the US, and the Flor de Nochebuena was renamed Poinsettia in his honour.

In the more northern climes of Europe, dark green Holly with its red berries represented the colours of the winter solstice, and as in Mexico, the red and green colours transferred over to the Christmas celebration.

Of course, by sheer coincidence the Poinsettia was also red and green, ultimately making it one of the most popular Christmas plants of all time.

More of the Friendly Friday Photo Challenge: Red and Green for Christmas.