A legend (leyenda) from Mesoamerica tells us that Quetzalcóatl, the plumed serpent, stole chocolate from the gods and gave it to the people of the earth.

Chocolate originated in Mesoamerica, and you can see the pods sprouting right out of the trunk of a cacao tree on a Puerto Vallarta Botanical Garden trail. 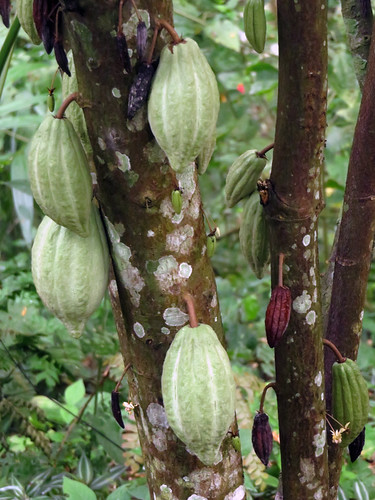 Cocoa beans were very valuable in these early times and often used as currency (from a mural by Diego Rivera).

This chart shows how many cocoa seeds were needed to buy different items, ranging from 1 seed for a tomato to 300 seeds for a rabbit.

Hmm, wonder if this chocolate coin would have worked in the mercados antiguas?

In pre-hispanic Mexico this drink of the gods was served cold, frothed and unsweetened. Díaz del Castillo, one of Spaniards traveling with Hernán Cortés on that first push towards Mexico City, referred to the emperor Monctezuma in his journal saying, “they served him a drink in cups of pure gold, called *xocolatl, made from the cocoa plant, that he drank before visiting his wives. I saw them bring him at least 50 cups of frothed xocolatl, and from each cup he drank a little…” – it seems that chocolate was the first energy drink!

Today in Mexico chocolate drinks are still beaten with a molinillo until they froth, but azúcar (sugar) is added (cane sugar, brought to Mexico by the Spanish) and sometimes vanilla (from the vanilla orchid, also a native of Mexico). This is the special breakfast starter of hot chocolate and a pan dulce pastry at the Restaurante El Cardenal in Mexico City. 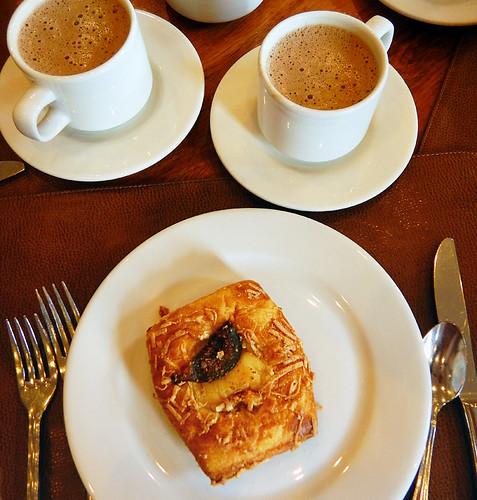 ‘Pan de dulce’ (lightly-sweetened bread) served ‘todas las mañanas’ with ‘Chocolate caliente’ (hot chocolate) is a favourite breakfast in Mexico, and also for the merienda when the grandparents take their grandchildren out after school.

Rolls of chocolate amargo (bitter chocolate) is used in savoury dishes such as the rich mole sauce from Oaxaca.

Small cakes of bitter chocolate waiting to be pulverized in a grinder in Puerto Escondido. 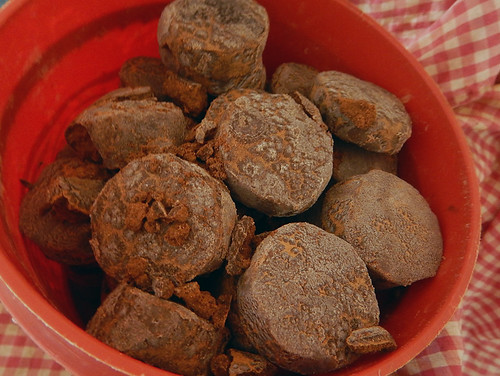 They sometimes use semi-sweet chocolate, gritty with sugar and added cinnamon or almonds in savoury dishes. What I find interesting is that they almost always use chocolate in a semi-traditional way, and chocolate for desserts and chocolate bars is rare.

This dark mole from Puebla was my idea of what mole really should be: super rich, spicy and with chocolate added. (How to make it.) 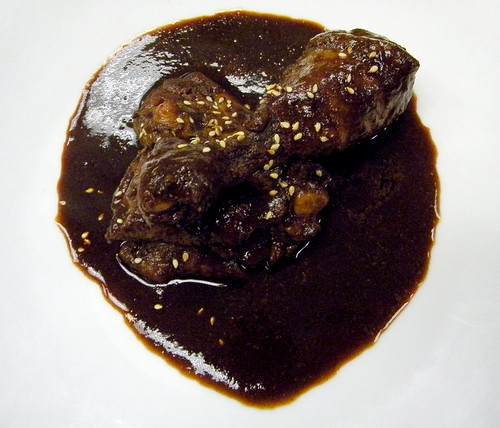 From Mexico the love of chocolate spread all around the world, and you can find a hot chocolate anywhere.

3 responses to “Chocolate, a Gift From the God Quetzalcóatl of Mexico”