Every time we’ve been to Spain we had trouble with the way they scheduled their meals.

If you (like Al) want a big breakfast, fancy some lunch around 1:00 and then opt for dinner around 6:30 or so, you will run into problems in Spain.

But first I will go back to Portugal in 2001, where the meal schedule is similar to that of Spain, and where we starved big time.

Breakfast was a café con leche and a delectable (but tiny) pastry. At 12ish all that appeared to be available for lunch was a small dry bun with a thin slice of meat.

By six we were starving. By eight we were clawing at the window of the only restaurant in town that said it opened at eight.

And now to Spain.

This little restaurant in Aviles serves just about anything you might want, at least according to the extensive menus on the exterior wall.

They appeared to have a similar pitifully light breakfast of a single croissant and coffee, followed by an excessively tiny lunch of a minuscule bun filled with one thin piece of serrano ham. By five in the afternoon we were starving, again scratching pathetically at the doors of restaurants that often didn’t open until 9:00 or 10:00 at night.

Our friend Mikey, an old Spain hand, helped us figure out the meal schedule and translated the experience for us.

First off is a continental breakfast at 8:00 or 9:00, followed by second breakfast at 11:00 or 12:00. Breakfast number one is usually a single croissant with coffee and fresh-squeezed orange juice.

Until Mikey enlightened us we thought that these tiny 1€ bocadillos were what the Spanish ate for lunch – now we know they are part of the second ‘breakfast’ served around 11:00 or 12:00 and which comes in a choice of sweet or savoury. 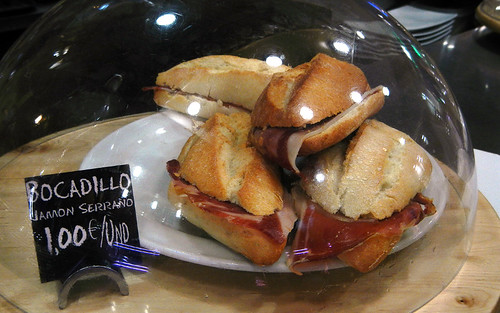 Orange cake and café con leche at the Parador. 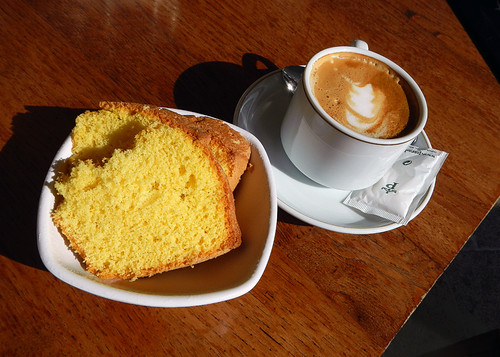 The REAL lunch is served between 2:00 and 4:00 when the restaurants open up and everything else closes. There is usually a ‘menú del día’. Another option is to order off the ‘carta’.

This is our lunch ‘a la carta’ of ‘Patatas Bravas’ (potatoes with attitude) and ‘Chipirones’ (deep-fried squid-like creatures) in Santiago de Compostela. As you can see, these are huge portions, and one definitely needs a few friends to share them with…

If you choose the ‘menú del día’ you really need to have somewhere nearby for a siesta afterwards. There is way too much food involved in this one meal to do it justice in this post so if you want to know more, here’s an example of a menú del día we had while travelling along the Sacred Shore and another up in the Picos de Europa.

Merienda starts around 3:30 or 4:00 and seems to be mostly attended by grandparents taking the grandchildren out for a little something sweet after school. Here is a popular merienda, very thick hot chocolate drink served with flakey Spanish churros called porras. 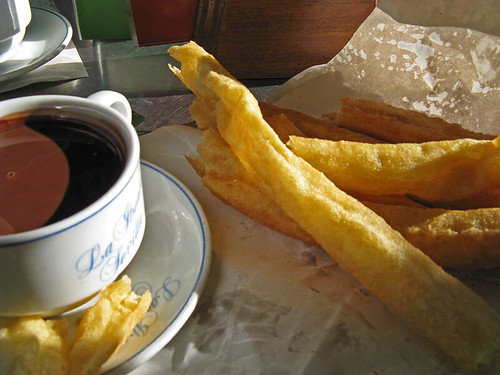 This afternoon ‘coffee break’ slowly switches over into tapa sessions with a caña of beer (a small beer) around 5:00. 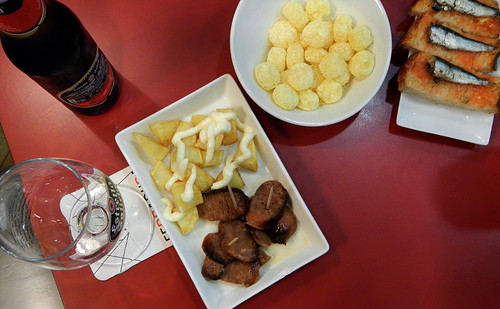 If you had ‘el menú del día’ for lunch you can probably survive on nothing but tapas and cañas for the rest of the evening.

But, if you’re willing to wait, there will be another menu del dia and extravaganza of eating available at 9 or 10 in the evening!

There is no night life in Spain. They stay up late but they get up late. That is not night life. That is delaying the day.

14 responses to “How Not to Starve in Spain”