May 31st, 2018. Following a frantic day where we crossed over into Sweden on the ferry, only to discover that the SIM card we had purchased in Denmark no longer worked. This was followed by an a fruitless search for some sort of way to connect, and then an even more frantic attempt to find some accommodation via an ‘Info Point’ that didn’t have maps or anything useful other than the information that Falkenburg would probably be the best place to stop. We made our only sight-seeing stop of the day at Kullen’s Fry, the oldest lighthouse in Scandinavia.

At this point it was getting late, and although we prefer to travel off the main roads, the GPS seemed to think that route would take hours. So off we went to Falkenberg, straight there on the highway, (and were not impressed, we almost never are with highways).

We arrived in Falkenburg at 4:45. It was another hot day, and Al wanted a drink and wifi, both he reasoned could be found in the nearby cafe. I jumped out of the car and ran in, only to find that, like the previous town, this cafe did not offer wifi with its beverages. I was about to ask them them where the tourist office was but then I spotted one kitty-corner across from a large parking lot.

We crossed over into the lot. It was a pay lot, and we had not yet acquired any Swedish coins, but we abandoned the car and raced over to the tourist office. It was now 7 minutes to five and it closed at five.

Doing our booking the old-fashioned way, we got the woman to phone up the B&B we had found in booking.com (from our library foray in the previous town). She said that there wasn’t likely anything available in the 800 SEK range but this place turned out to be 790 Kroner and that included breakfast. The tourist information told us that owner wasn’t actually at the B&B and wouldn’t be there until 6:00 – still book it!

Despite the delay in the owner arriving Al wanted to go there right away. It had been one hell of a day, way too much time wasted in a fruitless search for a SIM card that worked, and hotter than Hades. We arrived at the B&B at 5:15, where I spread out my wrap and we waited.

The owner arrived a half an hour later and took us in to this lovely modern hostel. To say I was fascinated with the kitchen would be an understatement. The kitchen was so new that even the owner had trouble showing us how to work the stove; she said she hadn’t yet figured it out herself. 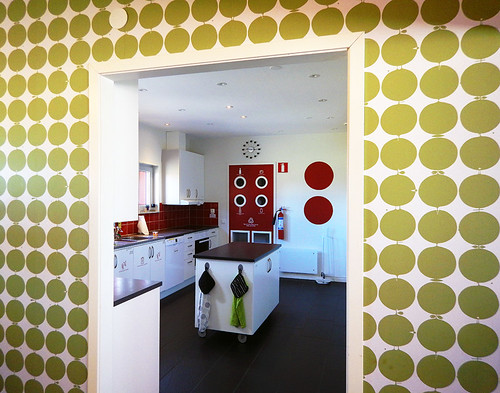 The sitting area was a display of Scandinavian design with cozy blankets for chilly nights. 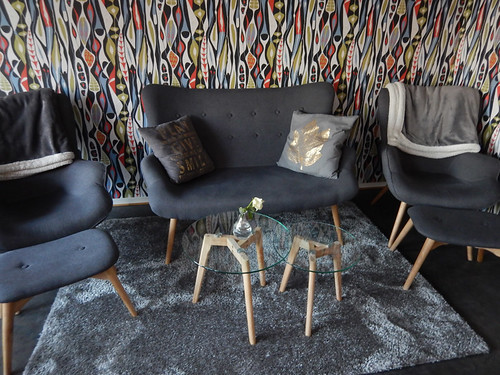 A fireplace to keep everyone warm, not really needed considering the constant daytime highs of 31°C that we were experiencing that May (although I suspect it’s not always like this). 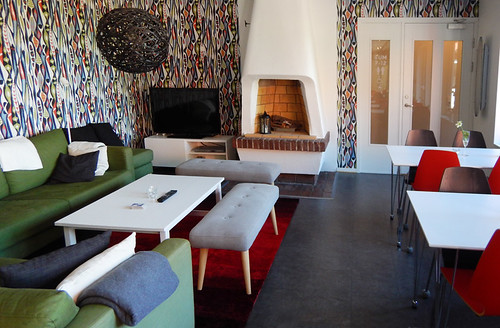 I was charmed by tiny details such as these modern design chairs with little wool ‘socks’ on them to keep them from scratching the floors. 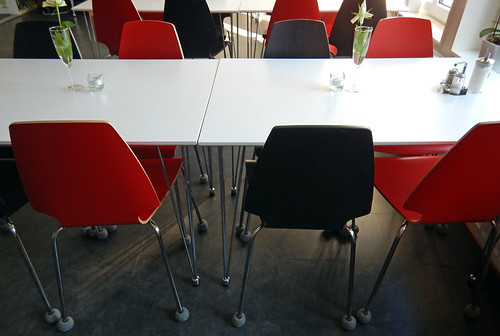 We went and fetched some beer from a nearby store where there wasn’t a lot of choice – everything was 3.5%. Back at the B&B we put the beer in the fridge and then headed out to a restaurant recommended by the owner. While it was only one and a half k away it was too hot to walk – on that both Al and the owner agreed. It was called the Ocean, Ocean Restaurant and looked over the beach. 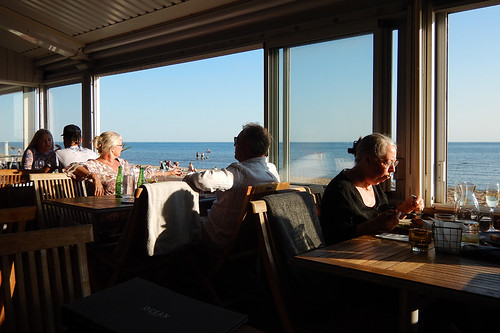 The restaurant was pricey so we only ordered the starters. Al opted for the ‘Butter-poached Asparagus’, described as having a ‘Morrel emulsion, fried rye bread, salmon roe, fennel & radish’. The ‘asparagus’ appetizer, when it came, consisted of one asparagus cut in half. I wish I knew what those crunchy brown bits and pink sprouts were! 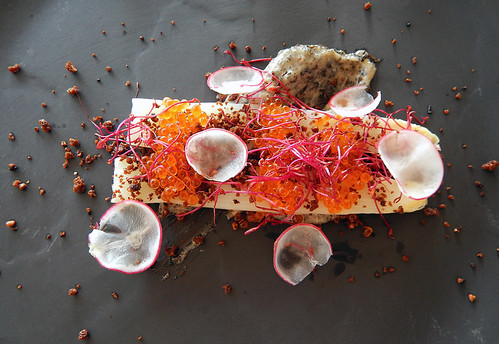 My tiny dinner was “Oceans “smörrebröd”, open-faced sandwiches. That’s crab on one side and I’m not sure what on the other, delicious though! And more of those pink sprouts… 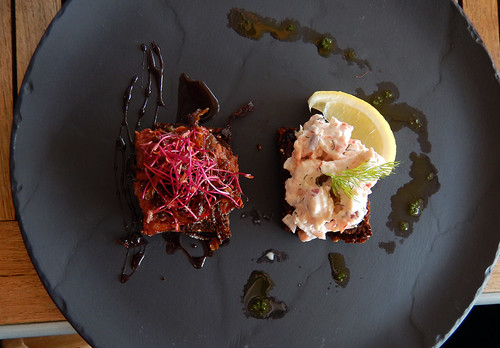 Bread and butter with flakes of salt on it to fill us up. We also had two decent-sized IPAS, and the whole (minature) meal came to $70. 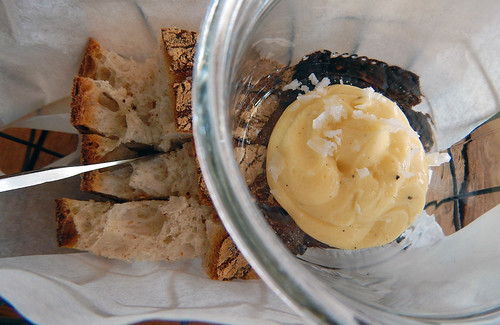 After dinner we wandered along the tideless beach. 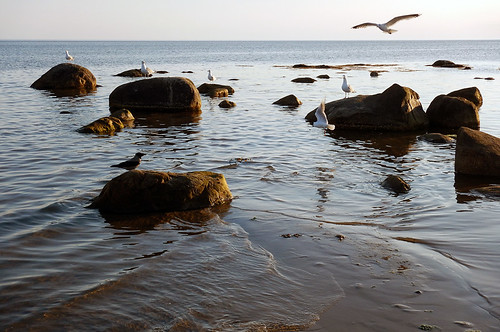 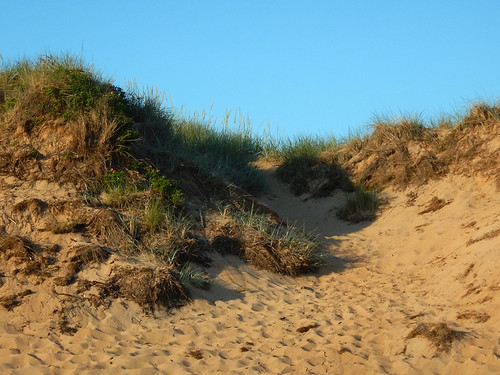 An expanse of the ‘strand’.

Summer ‘cottages’ by the beach, each approximately 16′ x 8′ – here I am guessing the size based on the 4′ x 8′ sheets of plywood you buy here in Canada. I’m sure the metric measures they use in Sweden will be different but only by a small amount! 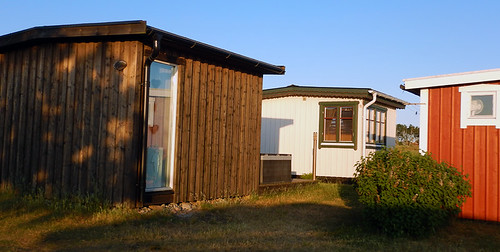 The next morning we had the breakfast and I admired the kitchen in more detail. This very graphic recycling centre really caught my eye. 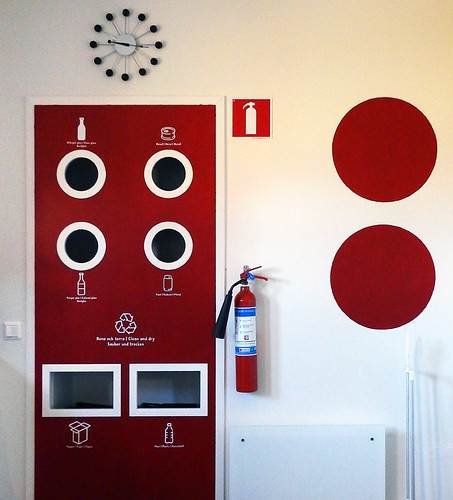 I even took photos of the garbage set-up. 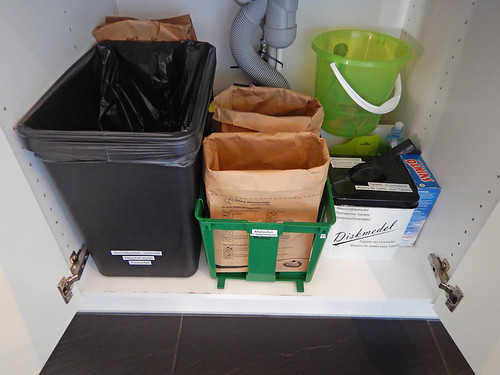 Love the display of cups. 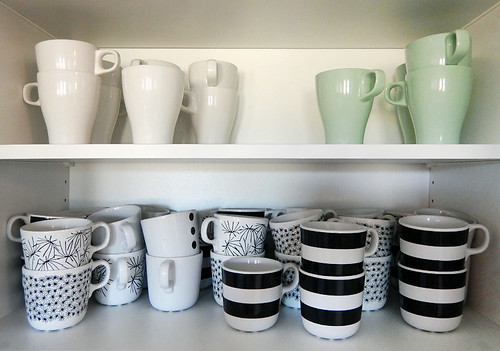 Even the cups and mugs were perfect looked perfect with the design of the kitchen. 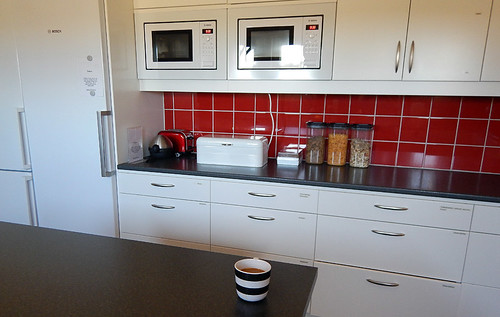 We only discovered the outdoor eating area the next morning at breakfast time. 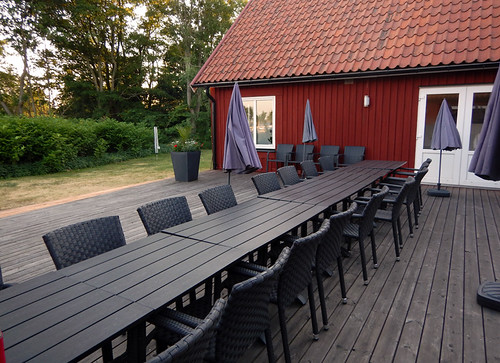 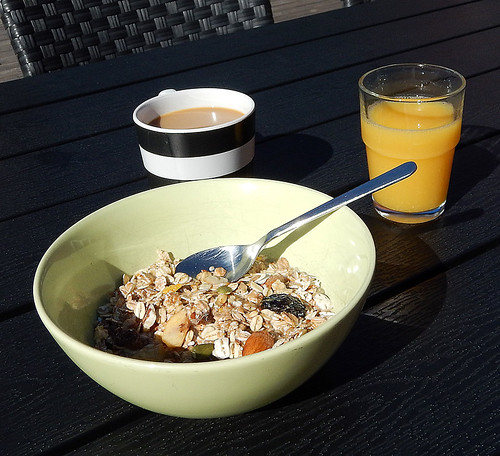 From here we set off further up the coast for something considerably older, Varberg Fortress from 1650.

5 responses to “A Wonderful Hostel and Dinner by the Sea in Falkenberg, Sweden”