We have travelled to Vietnam twice. The first time was for 30 days in November of 2003; the second in December 2013. Both times we flew into Hanoi, travelled the long road south and flew out of Saigon, aka HCMC.

I have tried to include an overview of both trips on this page but it will be awhile before I post much on the 2003 trip as the photos are all in photo albums waiting to be scanned. Any asterisk* equals a don’t-miss experiences!

Highlights of Hanoi 2003 included: trying to negotiate my way through the traffic (still extremely challenging in 2013); the food*, both French and Vietnamese, and even more fantastic in 2013; getting completely lost in the maze of streets of the Old Quarter*; the Temple of Literature; the Water Puppet Show; an unexpected experience with Len Dong – at the time a forbidden celebration that summoned ghosts from the past.

In 2003 the tour was unbelievably cheap, and we signed up for two nights, three days. That trip contained a trip to a historical cave, Catba Island (no longer on the itinerary) where we hiked and spent time on their beautiful beach, and swimming into a hidden lagoon (in November when the water was still warm). The food we had on the trip was the best we had on the entire trip (and the food in Vietnam was the best we’ve had in the entire world!)

In 2013 the weather was consistently wet and cold. Checking out the weather forecast we booked for the only sunny day in the upcoming week, and chose one day of kayaking.

A floating fishing village just off the island of Cat Ba in 2003.

A hilltribe girl cavorts in the waterfall in the mountainous region near Sapa.

We didn’t go to Sapa in 2013; the weather had turned unexpectedly chilly and there were reports of snow up in the mountains. Highlights of our 2003 trip included: the night train up to Lao Cai; a visit to the Dragon Garden above Sapa; the hike to a small village in the hills in the mountains; the Saturday Market when all the local Hilltribe people came into town to trade.

An agricultural area outside of Hanoi with boats that take you down the river and through a cave.

A bicyclist rides through an archway in the imperial wall in Hue, Vietnam.

In 2003 we visited the royal palace and the market; and took a $2.50 boat tour up the Perfume River that stopped at all the Royal Tombs on the way.

In 2013 we took a Motorcycle tour of these same Royal Tombs*, spending a lot more time exploring each tomb.

In November 2003 we arrived in historical Hoi An on the heels of a typhoon. People told us the place had been seriously flooded a few days earlier but the rain soon stopped. We went around to all the historic buildings; to the My S’on Sanctuary which were ancient Champa ruins outside of the city; and spent a lot of time on Hoi An’s lovely public beach*. It was colder and stormier in late December of 2013 but the beach was still beautiful. And in the town Christmas celebrations were in full swing!

Paint the Town Yellow (Photo Challenge)
How Do They Stay Afloat? (The Fishing Coracles of Vietnam)

Mosaic dragon at a temple in Dalat, Vietnam. The brown and green glass are from old beer bottles; the blue and gold sections are made from broken pottery.

We rented a motorcycle and went down the road aways. This shot is of the fishers bringing in the catch at a small beach along the road.

In 2003 we visited the Remnants of War Museum* and spent some time in the Fujian part of the city. Both trips we bought Vietnamese coffee* – something you definitely want to take back with you. 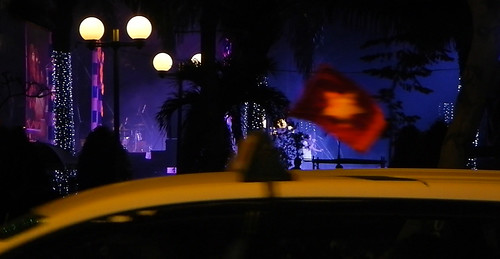 A Tour of the Mekong Delta