This week the Friendly Friday Challenge is Street Art.  I figured I would find examples of illegal and unsanctioned Street Art from my early ‘safe’ COVID walks that took me mostly through back alleys.

However, these were Westside walks and the Street Art tended to be mostly discrete. And if it wasn’t it was quickly painted over.

‘Yarn-bombing’ in the form of a heart crocheted on a chainlink fence. Beside the heart are crocheted musical notes and the words, “Bye Corona.” 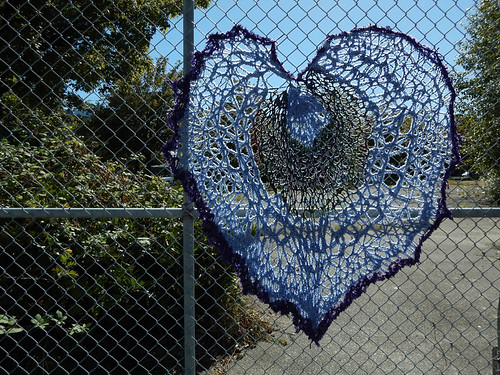 Stay-at-home ‘Poster Art’ series plastered over every boarded-up store and hoarding. (Photographed May 21, has now disappeared) 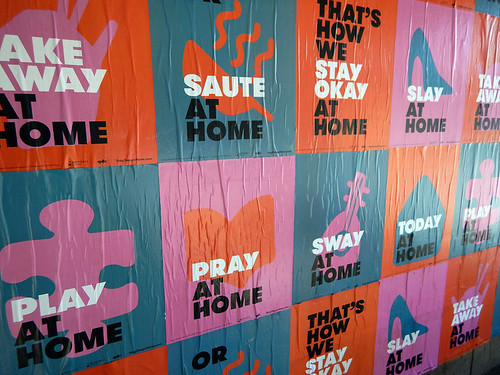 SORRY, a Canadian bat apologizes for coronavirus on behalf of all the bats in the world. This is ‘stencil’ graffiti that is often used for political commentary. (Photographed June 22, under the Granville Bridge, now painted over) 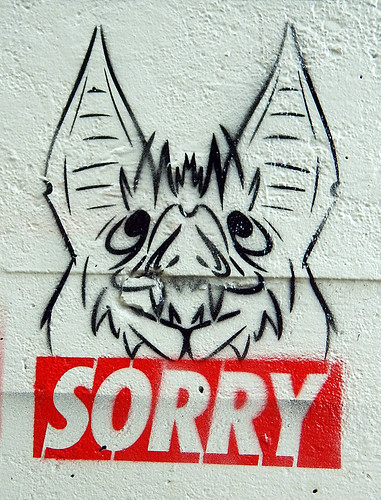 Painterly ‘brush’ graffiti on a set of stairs that are part of a public right-of-way. (Photo taken June 8, now painted over.)

I am fairly sure there was a credit to Caravaggio, a ‘plague’ painter who was active in Naples at the time of the Black Death in the 1600s. Of course it has now been painted over so I can’t check. I found that it actually wasn’t painted by Caravaggio, but by William-Adolphe Bouguereau, called ‘First Mourning’ and painted in 1888.  An article from The Guardian: Plague Visionaries, how Rembrandt, Titian and Caravaggio Tackled Pestilence. 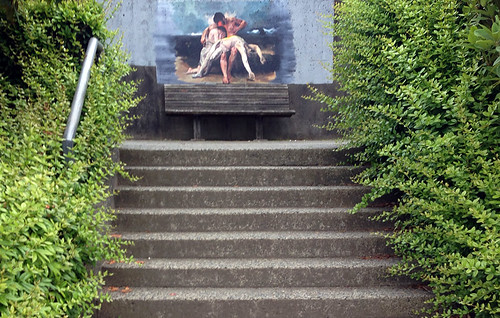 Is this ‘Sticker’ Street Art?

This is for sure! And here’s another heart. 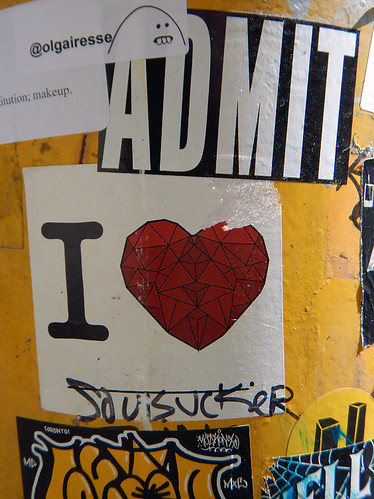 Tree with a tiny metal heart. 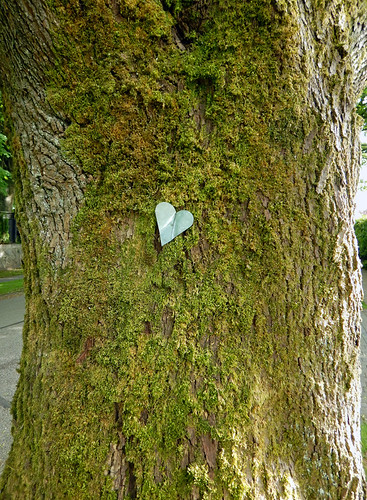 Yet another heart. I’m not sure the city would approve these happy hearts being screwed into their trees. Hearts in many different forms are showing up all over the Westside during this difficult time. 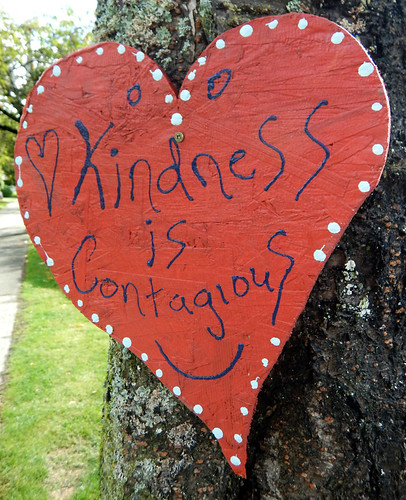 Most of this Street Art is certainly a labour of love, especially if you know it will be painted over as soon as it’s discovered! At any rate, after all this sweet Street Art I decided to head over to my studio in the Vancouver’s Eastside on the search for graffiti that looked and behaved like real graffiti. 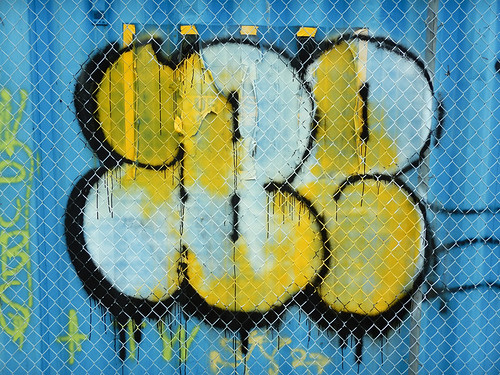 This little monster on a roll-up security door made me smile. 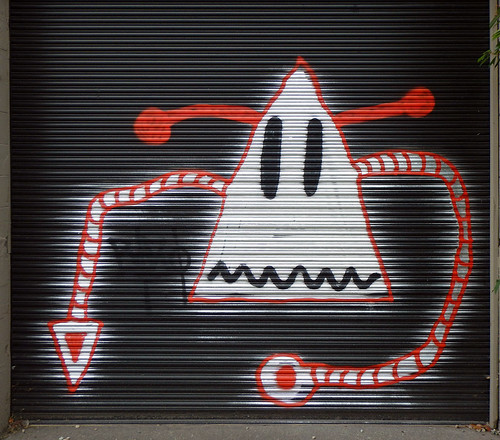 Then I went around the corner and down to a gate guarding the railroad tracks. This is done in what they call ‘bubble’ style, a form of ‘throw-up’ graffiti with rounded letters. Apparently railroad tracks are a key component of heavy-duty graffiti, and the Westside suffers from having had all its railways turned into community gardens.

A loading bay close to the building with my studio. 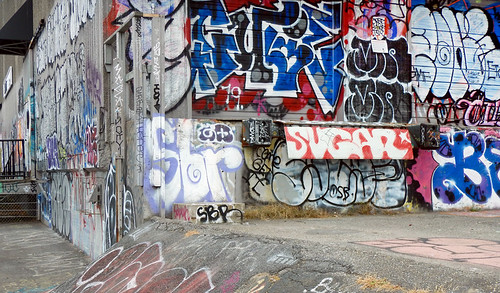 My studio, along with 250 other artists, is in 1000 Parker St, an old mattress factory next to the railroad tracks. This is called ‘wildstyle’ graffiti, difficult to read but very distinctive. 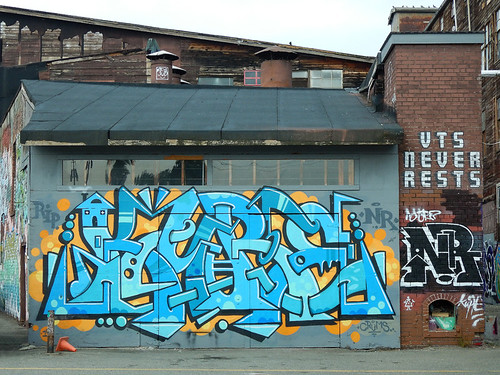 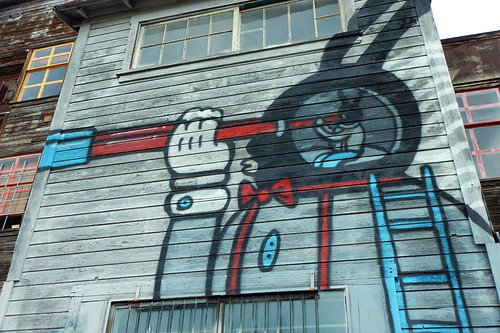 It reads ‘West Coast’. I’m not sure what this style is called. But obviously one needs active railroad tracks and private industrial buildings to have the real thing. 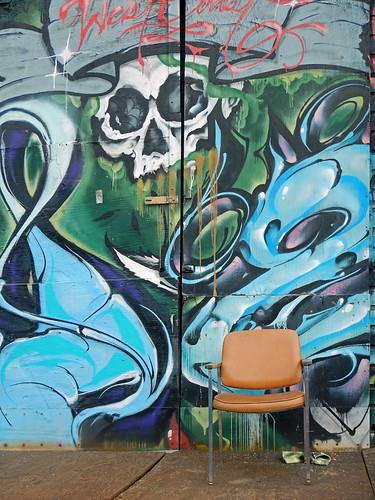 Looking across the tracks. All these are signatures, nicknames of the tagger, and most are dated ’19 as if they were art pieces. 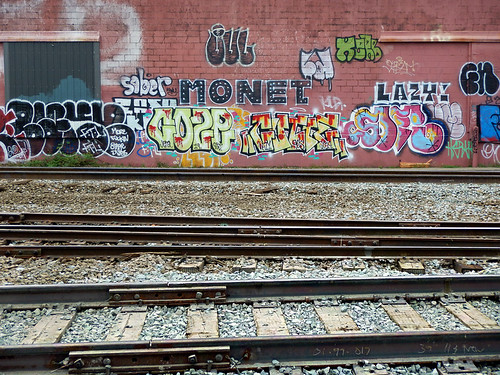 The question that often comes up is: Is graffiti art or is it vandalism? 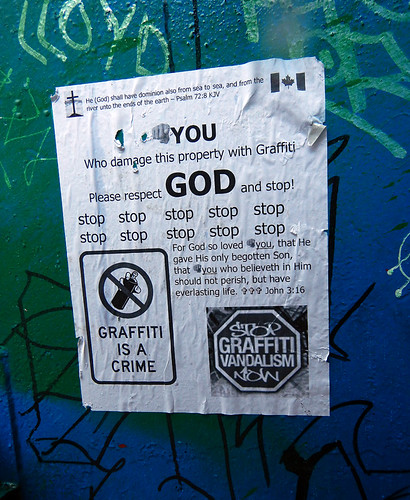 I personally think it’s art, but only when the artists are creative in the production of their work and spend some time on it, although spending time on it is the opposite of the original purpose of graffiti. Those that spend a few seconds spray painting their ‘signature’ and ‘tagging’ their territory are simply putting their ego up on the space, and are not artists in any way.

The ‘sanctioned’ murals produced by Vancouver’s Muralfest include some of the graffiti artists that spend time on their work and have built up a following for their high energy art: https://www.vanmuralfest.ca.