It was my turn to pick the excursion so I dragged Al to a mall in my search for Bangkok’s art scene.

I had been lured there by this marvelous poster about an ‘Illumination Exhibition’ at the Siam Discovery. Their web site burbled on about the Siam Discovery being a different type of mall, an art mall, with lots of things to discover. My kind of place!

The poster for the Illumination Exhibition that lured me to the ‘art’ mall. 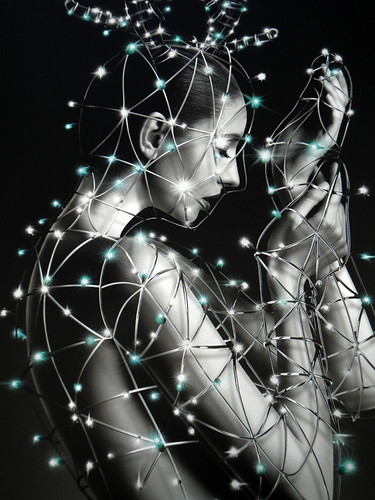 However, we got off the Skytrain a stop too early and ended up at the Siam Paragon. This really was a mall, huge and full of stuff no one really needs. They did have ‘Siam Ocean World’ on the lower floor and that looked as if it could be fun. But Al wasn’t at all impressed so we passed on it. 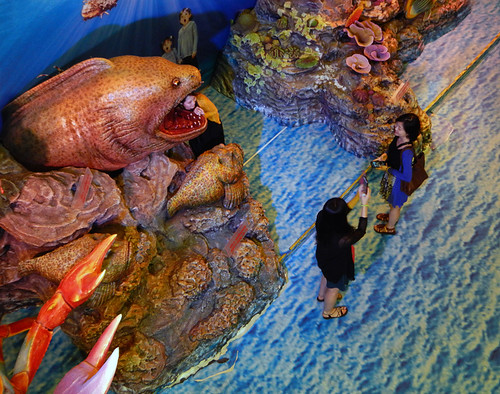 The main floor contained an exhibition of super expensive vehicles — 43 million baht for one of these babies. Each vehicle was accompanied by an impossibly tall, impossibly slim, impossibly beautiful young Thai woman. Dressed in sleek black dresses and killer heels, ankles neatly crossed, the poor things looked bored out of their minds.

Just after we arrived a group of these women got their lunch break. With relief on their faces, they retreated to a bench and eagerly opened their lunch bags, each containing a large bottle of water and a small rectangular object — probably a 100 calorie nutribar. They got to rub their feet too. Ah, the enviable life of the young and beautiful!

So much for the Siam Paragon. From there we passed through into another space called the Siam Center, and it was here that the Illumination Exhibition took place. It was a tad amateurish, and certainly didn’t live up to the poster. The best part was some light boxes of animated ads, and these weren’t part of the exhibition at all. 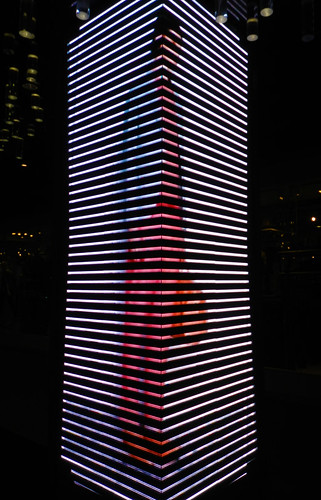 The Siam Discovery was next door to the Siam Center and finally we were in the supposed ‘art’ mall. But it was no different than the Paragon, and in addition I was forced to listen to Al muttering, “suckers” and “fools” all the way up and down the escalators.

Since my excursion turned out to be a dud, it was Al’s turn. His choice was a market with lots of stalls selling cheap underwear and knock-off Rolexes.

But again we got off the Skytrain too early, this time two stops worth. We were at Soi 53 instead of Soi 26, so it was trudge, trudge, trudge 27 blocks through the sweltering heat.

Anyway I wasn’t that disappointed that we missed the market when Al was distracted by a Brewpub — cold cold beer, curly fries with aioli, and chicken wings with blue cheese dip. YAY!

As for me, it was back to the research – I really wanted to discover Bangkok’s art scene!