There’s a protest in the Zocalo. 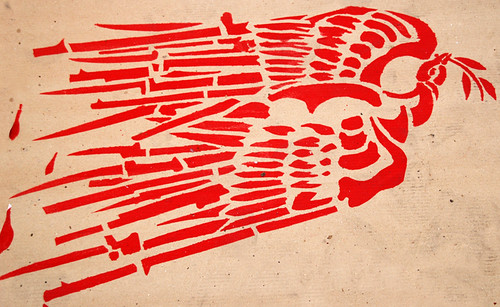 PAX is ‘peace‘, FOX is Vincente Fox, presidente of Mexico in 2006, now often in the news for his pithy tweets and hilarious videos addressing the situation created by the current president of the United States.

‘11 dead in Oaxaca’ reads another sign. This refers to the deaths caused by government-led attacks on the 2006 teacher’s strike. The teachers were protesting low pay and the trend towards privatization that excluded the rural poor and indigenous students. The dead included an American photojournalist whose photos showed a wildly different version of the strike than the official one.

“There will be music in the bandstand this evening… if there isn’t another demonstration,” the agent at tourist information adds sourly.

Which brings me to this book, The Jaguar’s Children by John Vaillant, a story of Mexico during this time period.

It is a novel about mega-corporations controlling corn, the base of Mexican life; and jaguars, a symbol of the Mexican people; and the 2006 teacher’s strike with its devastating effect on Oaxaca; and escaping all the magic and corruption of Mexico in the belly of a ‘JAGUAR’ truck; on being an illegal immigrant and crossing the border into a place of freedom… maybe.

This is a riveting novel, at points so intense that I had to put it down and read another book in between.

The story brought back so many memories of Mexico and points south. It is still relevant in 2018, when the signs in Mexico now read: ‘Best Breakfasts this Side of the Wall’ and children smash open piñatas of Trump to have orange Cheezies and plastic snakes rain down on them.

Also, almost forgotten in the current news cycles, are the attempts by mega-corporations to control the world’s food supplies, something that is dangerous and relevant to everyone.

A poster on a wall in Mexico: No a transgenicos. Sin maiz, no hay paiz. / No to GMO. Without corn there is no country.