Somewhat starving (we had missed lunch) we set out in search of somewhere for an early dinner.

But this was in the north of Ireland in late September and dinner seemed to be put on hold until next June! Despite its sign, the Beachcomber didn’t serve food but had great beer, great conversation and a great view.

But by the time we’d made it around the Fanad Peninsula we hadn’t found any place that served food and we were starving! The small towns and villages of the peninsula were picturesque, and it was here that we saw the sign that led us to our next stop, Conway’s Bar. 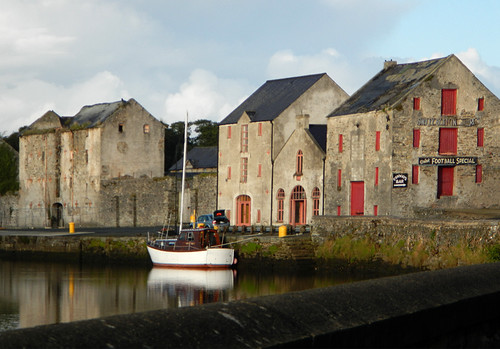 Conway’s bar was a lovely little place but they only served food on Fridays, Saturdays and Sundays. It was Thursday. They recommended the Red Bridge Pub at the other end of town, but alas, there it was the same story, “Sorry, we only serve food on the weekends. But why don’t you try the Traveller’s Inn in Milford.“

Again, the same story at the Traveller’s Inn. They recommended we try the Red Bridge Pub, the same pub that had recommended them.

By now we were really truly starving and quite desperate. To our great delight, Ripples was OPEN! Despite the surly waitress they had FOOD!

The beer and cider selection was crap so I ordered wine; Al had a Smithwick’s Red Ale which he said tasted more like malt vinegar than beer. And of course he had to inform the surly waitress of this. Surprising she lightened up and suggested he might use it on his fish and chips when it came, and then apologized saying she was afraid it was scraped from the end of the barrel.

My dinner was plaice, a flat fish like sole, in a lemon shrimp butter sauce with a side of mashed potatoes, quite good considering they had no other competition in the area.

By the time we got out of there it was dark and had to find our way back to Milford along a roller-coaster road. The lights of the oncoming cars were a nightmare and then it started to pour, reducing visibility to almost nothing.

The only good news in all this smozzle was that the next day would be Friday so we wouldn’t starve.

9 responses to “Sorry, we only serve food on the weekends (in the north of the Republic of Ireland in September)”