On a day-trip from Rouen.

One habit I wish I could bring home with me was the picnics in France.

While driving along a back road we got stopped for a bicycle race and told to turn back.

As it was lunch-time we headed straight to the nearest farmer’s field and set up a tail-gate party for two. It turns out we weren’t the only people with that idea: this French group had brought friends, picnic baskets, umbrellas and more.

Our first French picnic wasn’t overly spectacular – we had some cheese that had melted slightly from the heat accompanied by cold beer. The cold beer was grabbed at a small market five minutes AFTER the lunch closing time of 1:00 – we pleaded with the owner to have a ‘special opening’ just for us and he obliged! (Note: In France (also Belgium) everything closes down two hours for lunch. At 3:00 all the restaurants close and the stores reopen. If you do not eat within the designated hours you will go hungry!) 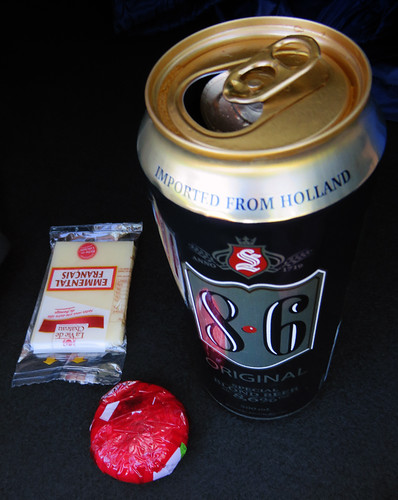 Here I’m holding up the beer but this image is really about the view. Although nondescript it was somehow lovely, and at one point the farmer went by in his tractor with his little dog sitting next to him. Al described our 8.6 beer as a Euro-beer, giving it only 3 stars. But I really liked it and gave it 4 stars. Maybe it was the setting! 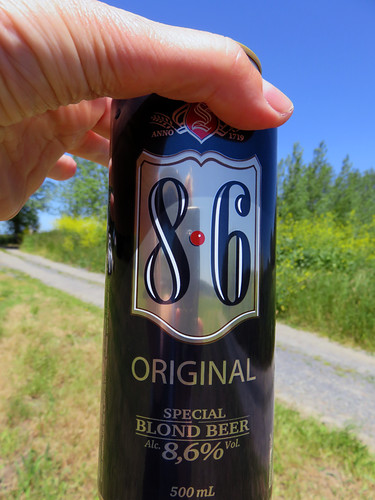 Later, for some reason, we were allowed to drive along the race route as long as we didn’t run over the bicyclists. It was very surreal, like being in a movie where some hapless tourists are caught up in the middle of the Tour de France. To complete the picture all we needed was a bunch of spectators to regally wave at as we drove past.

This is our route, the day starting with a stop at the ruins of an ancient abbey in Jumieges, followed by this picnic and then off to Honfleur on the coast. But it was the first sunny Saturday in June and everybody had gone to the Honfleur – the place was packed and even pay parking non-existent.

Thus we carried on down the coast to Beaumont-en-Auge. It was fractionally less crowded and with further French ‘picnics’ on our minds we bought a selection of dark chocolate with almonds and ginger. 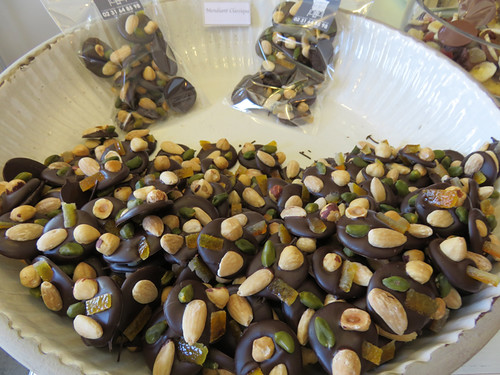 From there we headed inland to explore the ‘cider route’.

5 responses to “A Detour Leads to Our First French Picnic!”