Editor/Daughter’s Note: From my dad’s journal of memories, this story from Vancouver in 1951.

I met a young Dane named Poul and we moved into a rooming house on Thurlow St. run by Mrs. Blezard, a policeman’s widow.

Poul worked at the Fraser Valley Dairy and had heard about them needing employees at Arctic Ice Cream, a subsidiary of the dairy plant. It was only a summer job but I went there right away and put in my application.

Luckily I had some past experience in my father’s creamery in Denmark. The manager of the plant phoned Mrs. Blezard and asked about me and she gave him a glowing recommendation.

I was called to Grant’s office and, so as to point out I wasn’t the only applicant, he pulled my application out of a big stack of papers, and after that he gave me the job. 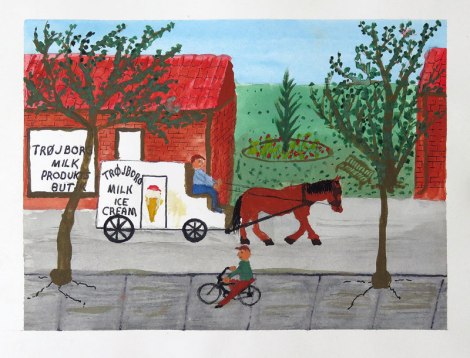 Being familiar with dairy machinery I quickly caught on despite the new developments in technology in the intervening 15 years. Of course the new technology was designed to water down the product and simplify the range of products, to achieve economy of scale for the greatest profit, so what else is new?

Back in Denmark in the dirty thirties our emphasis was on customer satisfaction with a large variety of real fruits and high fat creams and egg white for smoothness.

Here they were replaced with cheaper substitutes such as guar gum for smoothness and low fat creams. The homogenizing and cooling equipment when whipping helped as well; I heard that in the US they had developed methods for making fake ice cream from seven percent milk.

There were three men and seven women on each of the two shifts plus a number of support and delivery staff. The men did the production work as it involved a lot of heavy lifting and the women, with the greater hand dexterity, did the packing of the products.

Came the end of the season my two colleges went on holiday. I was left to do the work of three till they came back after which I would be laid off.

Now, to do the job properly, I had to develop extra sensory perception as it was necessary to know exactly when to shut down a machine before it froze up at the end of the whipping process, and this could happen very quickly.

My boss Grant attempted to help me but he did not have the feel for it. Soon he gave up leaving me to carry on alone, not easy, as I had to load forms into the freezing tank and at the same time run across the floor to get to the machines push the switch to shut them down.

Below is a painting of the workroom at the Arctic. It has to be explained as I found it difficult to remember and paint all of the paraphernalia. The forms in the tub from the bottom of the picture are filled with cream and as they move up, they freeze and at the other end they are pulled out of the brine by the fellow standing there, dipped in a hot water tub to loosen them and then the ice cream sticks are dumped on the packing table which is also moving down the line of girls who wrap them. 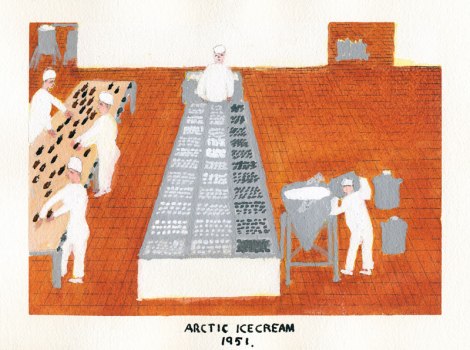 In the background behind the wall in the center is the homogenizer and other miscellaneous equipment plus a lot of pipes under the ceiling that I failed to portray. This is one of those times when a camera would have been really good to have.

So now I was laid off then comes the next chapter of my new experiences.

4 responses to “Working at Arctic Ice Cream in Vancouver, 1951”