A friend told me that Al and I were considered to be the experts on Mexico City. And since we’ve been there at least a dozen times, I guess we are.

He was going there for six days in April. What would we recommend? 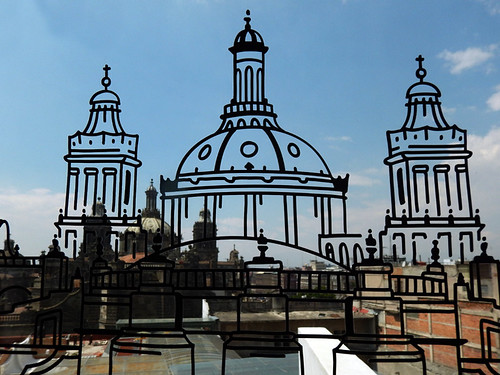 Of course, in checking out the goings on in the city I found a number of things I haven’t seen and would love to. If I haven’t been there but it sounds interesting I have marked it with a *NBT (Not Been There).

Hey Phil, maybe six days aren’t enough. And do you mind if we tag along?

Quick note: Most of the 150 museums in Mexico City are closed Mondays. And, as we found out, Chapultepec Park is completely locked up as well.

The Palacio National, located in the Zócalo (Plaza de la Constitución), has amazing original murals by Diego Rivera, Jean Charlot, Fernando Leal, Ramón Alva, Fermin Revueltas and José Clemente Orozco. You will need to surrender a passport or driver’s licence with a photo in order to be allowed in to see it (one photo ID per group).

Templo Mayor, Aztec ruins discovered while putting in a metro line. An archeological site with an excellent museum. Nearby there are street dancers in incredible costumes. 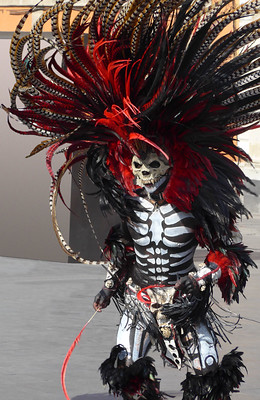 The República de Guatemala, the street behind the Aztec Museum, which changes into the Calle Tacuba as you go west, is filled with wondrous art galleries.

The Palacio Postal, which, despite its gilding, is actually a working post office in the city center.

Palacio de Bellas Artes, early 20th-century architecture located in the Centro Histórico with an art gallery and amazing murals by many of the great Mexican muralists. If you can prove you’re over 60 it’s free to see the murals.

Diego Rivera Mural Museum. At the other end of the Alameda park that backs the Palacio de Bellas Artes.

Mexican Wrestling with the Luchas Libres.  Most nights but Friday nights at 8:30 are usually prime. Matches are held at Arena Mexico. Tickets can be purchased online from Ticketmaster but the preferred method is to buy them at the the stadium itself. There were five of us and we managed to get seats quite close to the action. No cameras are allowed (they take them from you) but there were smart phones galore filming the action. This one is off the map at the lower left.

My post about the Best Food In and Around the Zócalo.

Map of the Historic Center; my favourite sights are marked with yellow dots, restaurants with orange dots, pastry shops with pink ones and the hotel we stayed in, the Hotel Isabel with a teal dot. The hotels around the Zócalo and nearby are often sights in themselves, with rooftop eateries.

2. Chapultepec Park, the Hill of Grasshoppers. 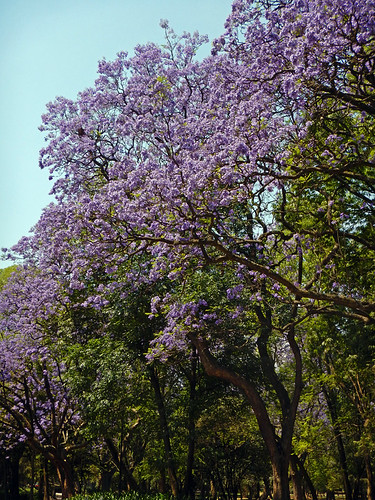 A 1600-acre park filled with a zoo, carnival rides, museums, a castle, and more. Warning! the entire park is completely locked up on Mondays!

3. Teotihuacan, City of the Gods.

A huge Meso-American complex open 365 days a year. It is located outside of Mexico City; go there by local bus rather than tour group, just for the experience! Buses make the trip from Mexico City’s north bus terminal to the Pyramids about every 30-60 minutes.

Advice from a friend: “I highly recommend you get there right as it opens. If you do you can simply walk up the Pyramid of the Sun. Once the tour buses start pulling up it will easily be a 2-hour lineup wrapping right around the pyramid to get up. It’s even busier on the weekends.”

That’s quite a change from when I was at the pyramids in 1976. It was in the middle of a tropical thunderstorm and we were the only tourists at the site. Behind the Pyramid of the Sun was a restaurant called La Gruta, situated in a cave with enough tables to serve a lot of tour buses, and again it was just us and the black-suited waiters, watching the lightning flash just outside. The restaurant is still there and apparently still has the wonderful spooky atmosphere and great traditional Mexican food – certainly that was an experience I’ll always remember. 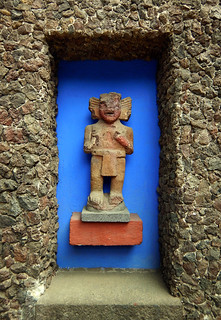 Near Frida’s house is the National Museum of Popular Culture which I love.

Recommended by Huffington Post: Tostadas Coyoacan, in the market, offers tostadas with a myriad of tasty toppings. Because it was recommended by a major news source several other eateries have taken almost the same name. We went to the ‘original’ one, very good and inexpensive. They don’t serve beer but you can buy it in the nearby 7/11 and drink it with your yummy tostado.

A coyote, the symbol of Coyoacan, a suburb of Mexico City, on top of a pedestal.

Experience has told me that the prices in the cafés of these two neighbourhoods are astounding, four times the prices near the Zócalo.

That said, Lonely Planet has recommended the *NBT San Ángel Inn just across the street from the Museo Casa: “Now housing a prestigious restaurant, the former pulque hacienda is historically significant as the place where Pancho Villa and Emiliano Zapata agreed to divide control of the country in 1914.”

I might take a peek but wouldn’t eat there unless the prices are listed. As noted, check the prices before ordering; even a coffee or una cerveza in these neighbourhoods can seriously set you back!

This UNESCO Heritage site, founded 1551, is just south of San Ángel. The current campus was designed in the late 1940s as a symbol of post-revolutionary Mexico. Mosaic wall on library; also mosaic exterior on the Olympic stadium.

Reserva Ecológica Pedregal San Ángel: botanical gardens at the UNAM are free, open until four pm. The dark volcanic rock creates a dramatic backdrop for the cacti that grow there.

This is the priciest neighbourhood in the City, again thanks to that socialist/artist Diego Rivera and his friend, the architect Luis Barragán, who envisioned something a little more egalitarian, where people could get back to nature.

Soumaya Museum, is a swoop of silver, designed by the Mexican architect Fernando Romero, with a collection of art works spanning 3,000 years. One of the few places open on a Monday! 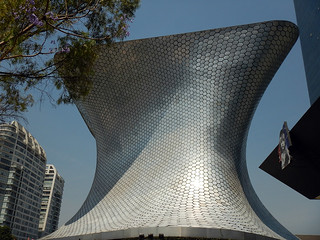 The Metro. We go everywhere on the Metro; it’s the best 5 peso ride in the world! Avoid rush hours; be very aware of pickpockets – I wear a money belt when I take it, hold onto my camera and phone – and have fun. Some of the stations have Aztec ruins in them, another a science exhibit with stars overhead. Be warned that this adventure is not for everyone, especially if you dislike extremely crowded places!

La Merced Market. One metro line has a station that opens directly into the massive La Merced market where we once bought some kitchen essentials: a lime-squeezer and a molcajete. There is so much stuff here. Busiest on the weekend; try visiting it during the week. 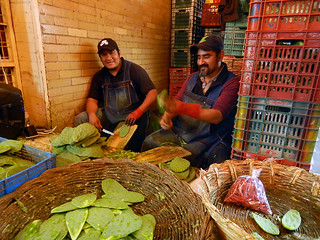 Lonely Planet has a great article about the best markets in the city. 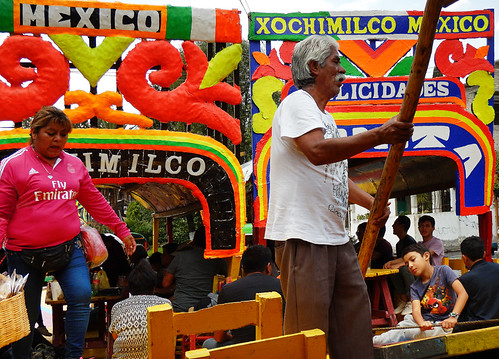 Xochimilco, formerly the floating gardens of the Aztecs, is now a floating festival at its liveliest on Sundays when Mexican families gather together and cruise down the waterways on boats. Boats full of Mariachis would play requests and smaller boats buzzed around selling snacks and food!

‘La Isla de la Muñecas’, or the Island of the Dolls, a creepy-looking place in Xochimilco. We just saw this from the boat; we didn’t actually go into the island 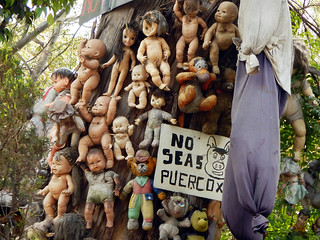 *NBT The Dolores Olmedo Musuem complex features a collection of pre-Hispanic, colonial, folk, and contemporary art, including a large collection of works by Frida Kahlo and Diego Rivera. It’s a way out of the centre, nearer to Xochimilco.

8. *NBT  Tlalpan, a colonial town within a city.

Take the Turi Bus to Tlalpan or the bus south on Insurgentes until the Fuentes Brotantes stop. The market in this colonial town offers many handmade items and fabrics. The Tlalpan Chapel was designed by Luis Barragán.

9. Outside of Mexico City.

A great day trip is the Meso-american ruins of Tula which contain the large humanoid statues called Atlantes along with a desert landscape. Open every day. 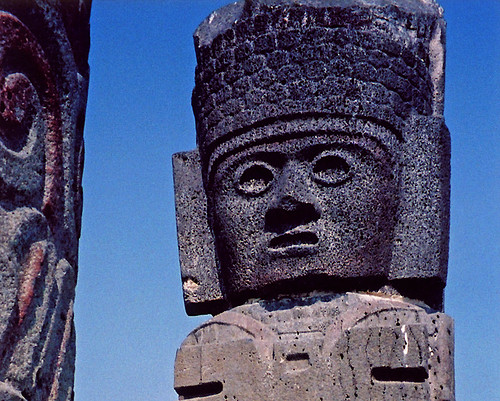 10. Puebla, beneath the Popocatepetl Volcano.

Being only two hours from Mexico City the colonial city of Puebla is an easy day trip but it’s there’s enough going on that you might want to stay for a few days. The historic centre of Puebla has preserved baroque cathedrals, palaces, and azulejos (tiled houses) dating back to the 16th century. Buses travel to this UNESCO Heritage city from TAPO Bus Terminal in Mexico City. 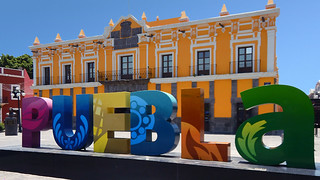 One of my favourite things to do in Mexico is to stay in an interesting town and then go on by local bus to explore nearby villages. Puebla has Cholula, one of Mexico’s ‘Pueblos Mágicos’ under a snow-covered volcano with hundreds of churches; a Talavera Pottery Museum; Container City, a complex of galleries, bars and shops; and the world’s largest pyramid. 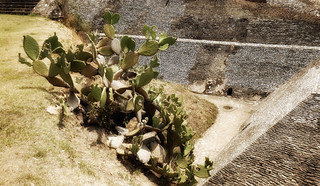 Further afield are the towns of Tochimilco, Atlixco (under the snow-covered slopes of Popocatépetl volcano), Zacatlán de las Manzanas plus two more ‘Pueblos Mágicos’, that are always worth exploring: Cuetzalan & Pahuatlán.

If you’re thinking of heading to Puebla check out my menu from the state of Puebla featuring specialities of the region.

13 responses to “My Favourite Place: Mexico City (and Things to Do When There)”