I don’t often photograph people, mostly because I am a bit timid about asking permission.

One of the best things I did to overcome the bravery problem was volunteering to do some of the photography while I was working at UBC Chemistry. This photo is a favourite because I was supposed to get some ‘happy student, happy prof’ photos, and my first attempts were quite boring. Then I asked the students if there was anything they didn’t completely understand about their last lecture, and they started asking their prof questions, completely forgetting that I was standing there with a camera.

Lab Skills Competition at UBC Chemistry Department for Grade 12 students using motion blur to disguise the ID of anyone under 18 who were not able to give the university legal permission to put ‘recognizable’ photos of them up on the web. I did a couple of ‘blur’ smears on anyone that was recognizable.

Although these three guys look rather disreputable, they were really rather sweet, and even invited us over for dinner that the ‘leader’ would cook just for us. This is one of my favourite shots because it represents the kind of street photography that I had always wanted to do but never had the nerve, and I have to thank my work experience for that. 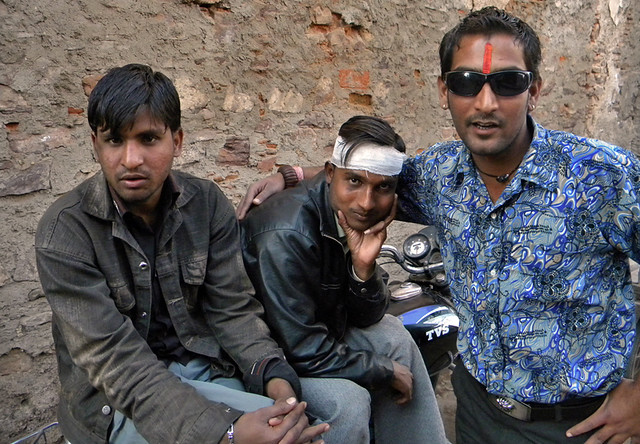 Some mischievous boys in Siem Reap, Cambodia. In 2007 Cambodia was still dealing with the painful residue of Pol Pot and the Khmer Rouge. But the children gave me hope for the country.

Mark McDermott explaining how he paints his hyper-realistic oranges in his Vancouver studio. 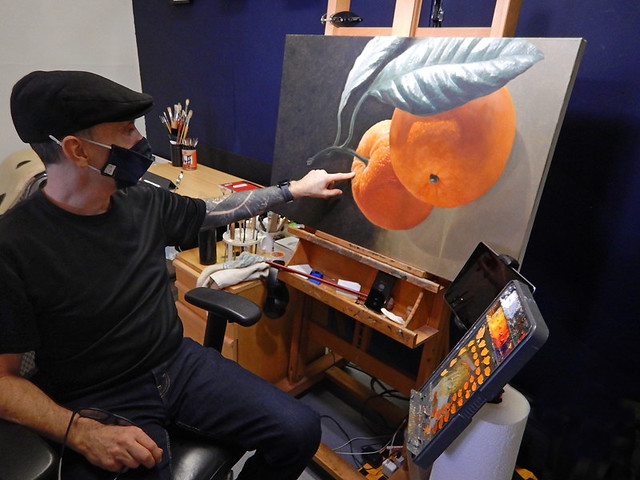 I like photos of the little details which add to a story.

Mark McDermott’s palette of the range of orange paint needed to paint a hyper-realistic orange. 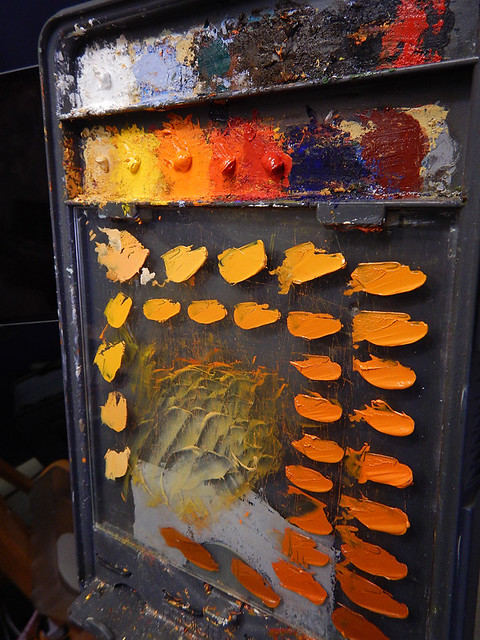 Virgin in a glass ball at the cemetery at Gurteen Beach, Ireland. 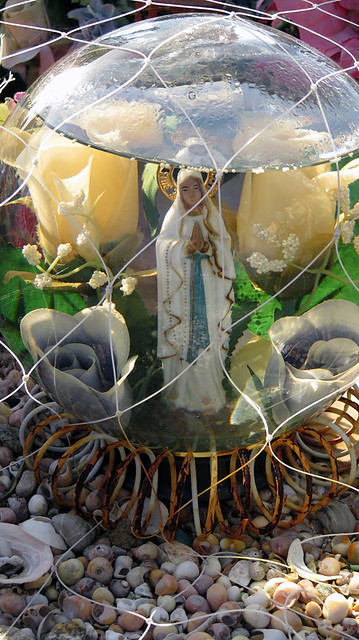 I spotted a CCTV with its modern technological security in the Ananda Pagoda, one of the many ancient temples in Bagan, Myanmar 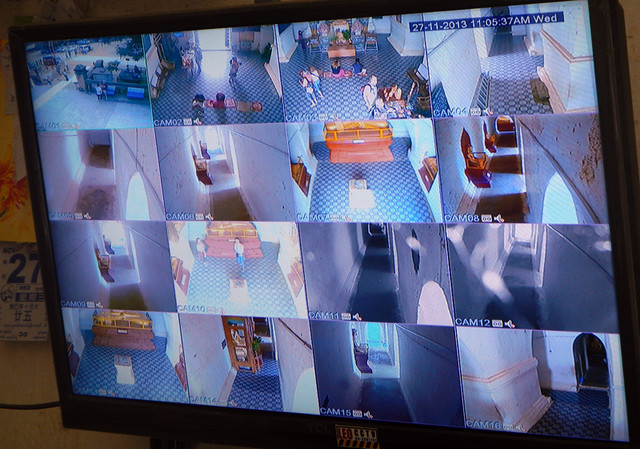 Detail of the silver ‘rooster’ buttons on the black pants a Mexican Mariachi costume. 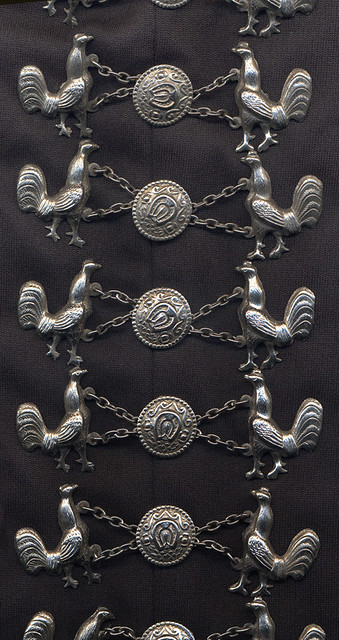 Four live pigs in baskets being transported by motorcycle in Luang Prabang, Laos. 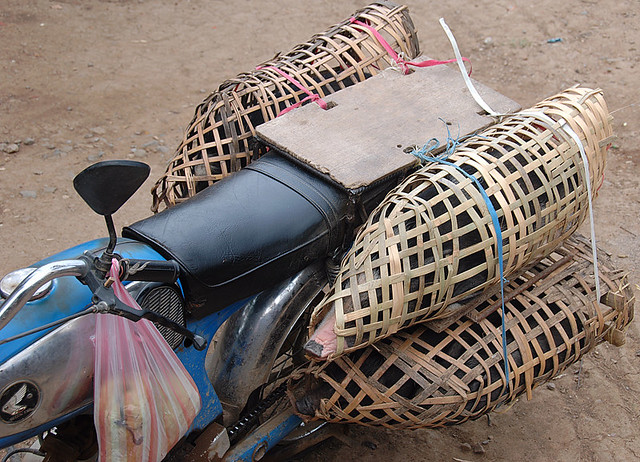 Little monk playing with a gun on the temple grounds at the ‘End of Inle Lake’ in Myanmar said something about the Buddhist religion that I didn’t want to acknowledge. 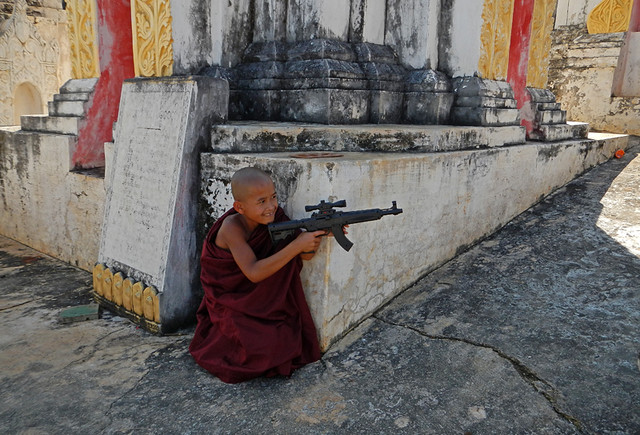 The Disneyesque temple from a distance rises above the oxen and motorcycles in the village at the ‘End of Inle Lake’ in Myanmar. This place was like being caught in a time warp. 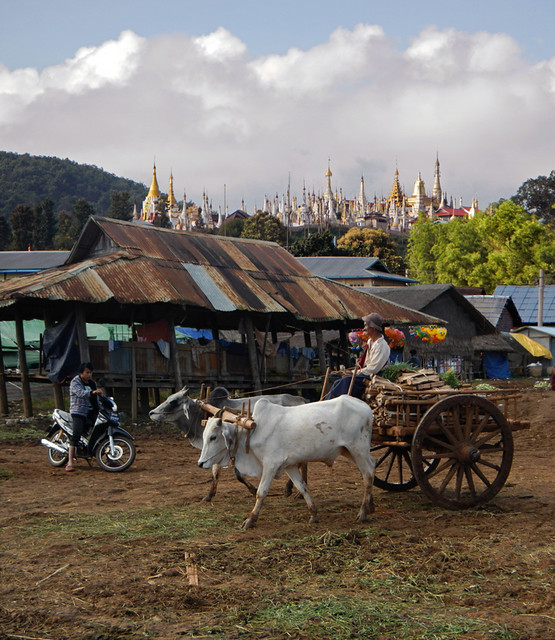 Tree skeleton on Tofino’s Tonquin Trail, Canada. What can I say, I have this thing for tree skeletons. 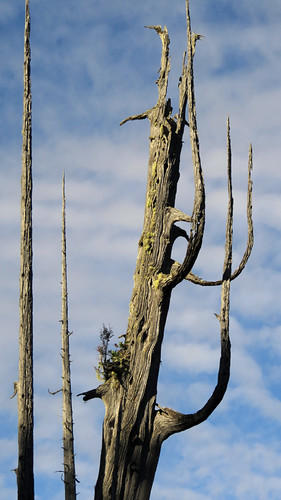 Ireland has to rate as the place where I took the most photos, somewhat astounding considering the country was coloured mostly in shades of grey and green. The cemeteries were always wonderful and moody… 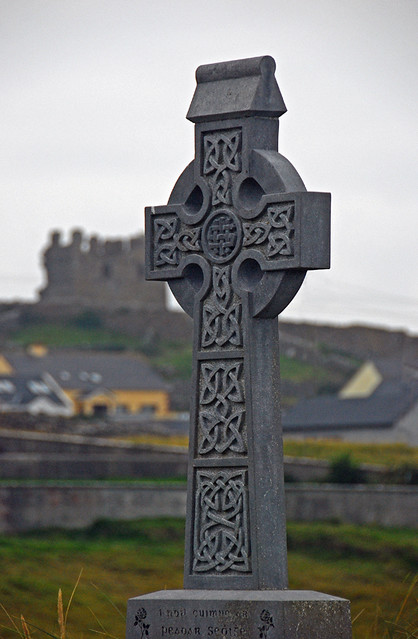 I have a ton of photos of Utah as well, and they are mostly red. This is ‘The Wave’, striped sandstone surf near the Utah/Arizona Borderlands, USA. There is a lottery to get in and it is well worth the effort… 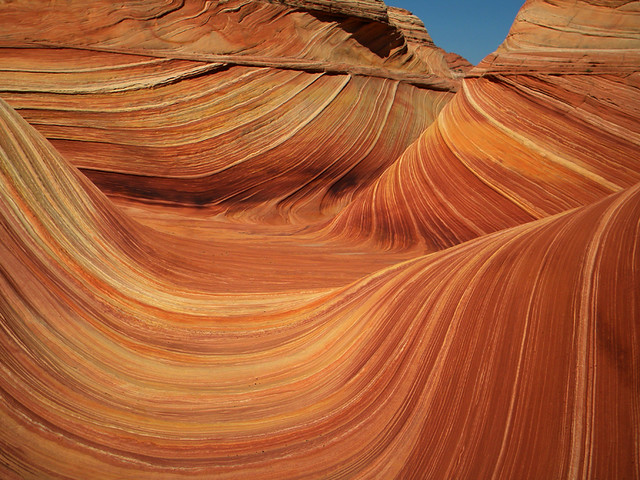 An unexpectedly emotional journey for me when we decided to detour into France and ended up at the Vimy Memorial. It later turned out that my grandfather had fought there for most of World War 1 and was one of the few survivors of that brutal war. 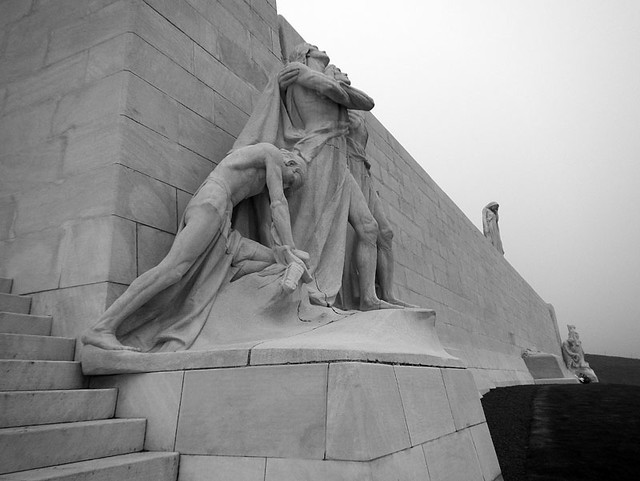 I’ve never seen a sunset I didn’t like but there are so many faves among them that I wouldn’t know where to start. So here I pick my favourites amongst other types of light.

Through an arch, ‘Golden Hour’ light shines on Burrard Bridge in Vancouver, Canada. I took a lot of shots as we were walking across the bridge at just the right time of day. 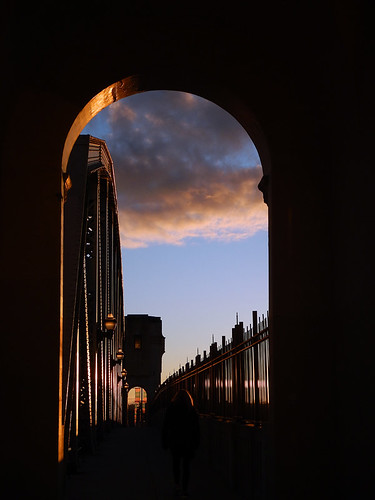 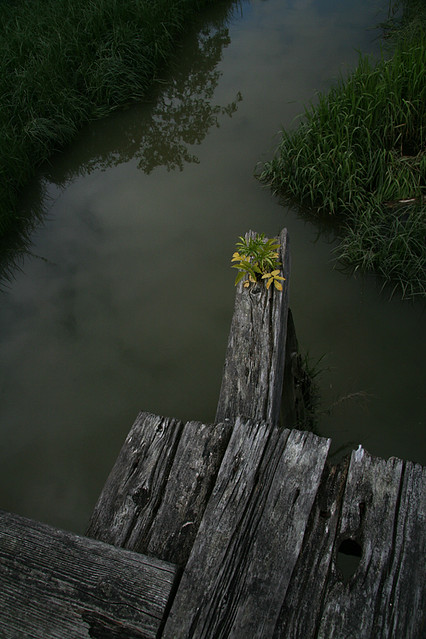 People kept saying, “You know it rains a lot in Bali in November.” But along with the slashing rain and dark skies there’s also fog. Bali rates as the most atmospheric country, and has the most magical foregrounds. 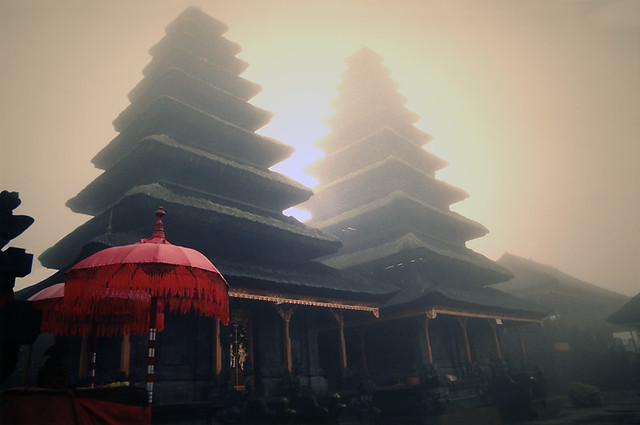 Riding the lights at the PNE Fair, one of Al’s tripod shots during the ‘Blue Hour’. 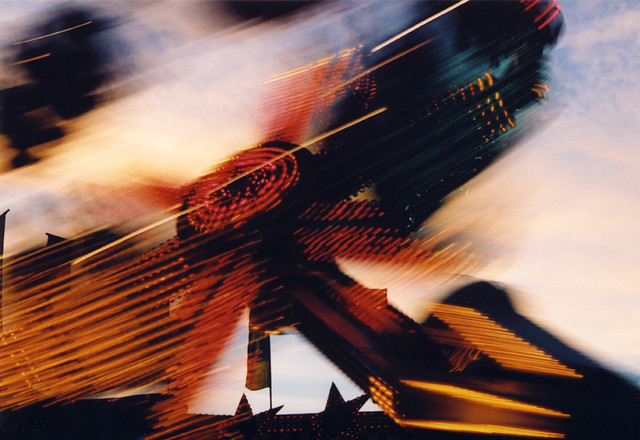 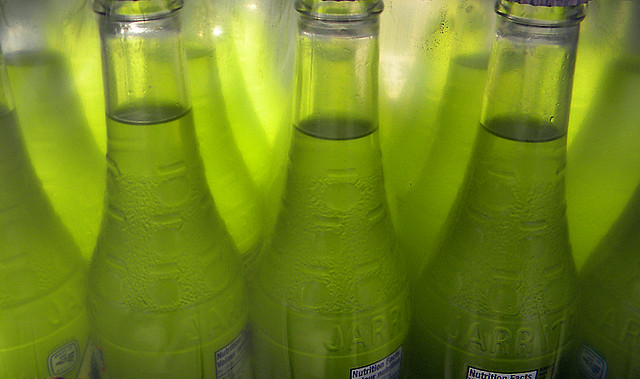 I’m always on the lookout for abstractions of ordinary things.

A gallery of abstract paintings, courtesy of the mold formations on the walls of Fort Cornwallis in Penang, Malaysia. This one I called ‘red river outflow into an icy sea’. 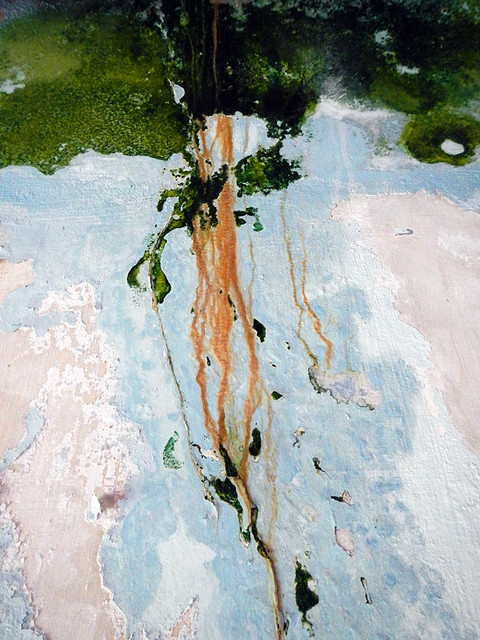 Charcoal heater beside our table on a chilly balcony in Hanoi, Vietnam. 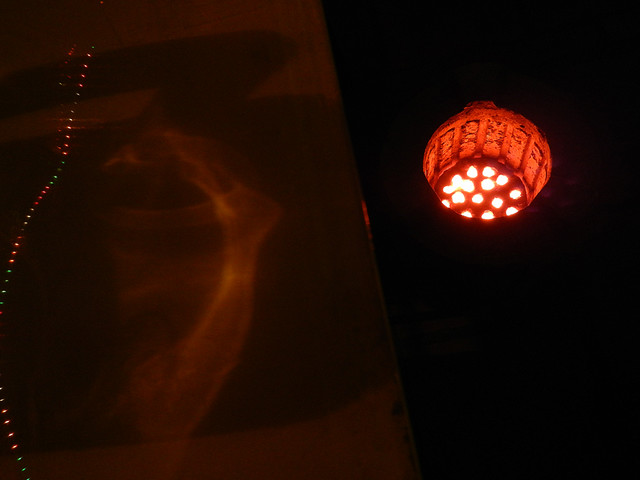 Fresnel glass, used in lighthouse beacons, is part of this glass exhibit in the Netherlands Architecture Institute (Het Nieuwe Instituut) in Rotterdam, Holland. 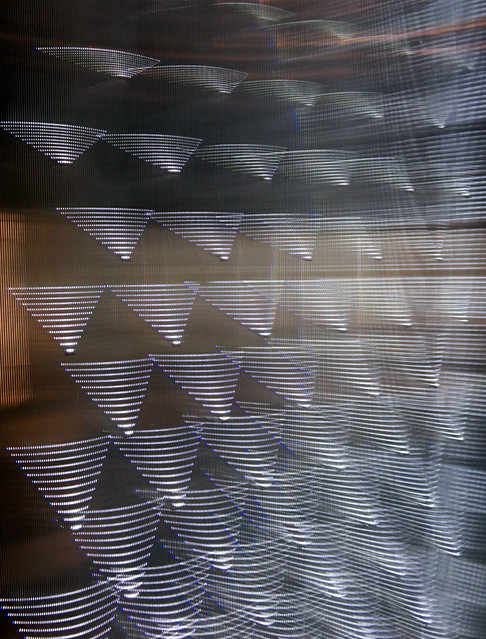 Layers of sun-exposed tape and cut-up posters form a mural on a wall in Bangkok, Thailand. 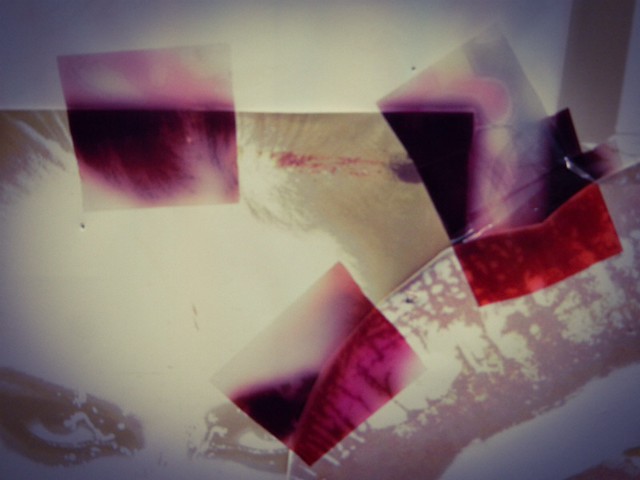 Diptych abstract of a compared with a mouldy wall with a strip of orange paint in Mexico combined with a Bronze Age wall made up of alternating panels of both the orange inner bark and the white outside bark of the birch tree at Tanum in Sweden. 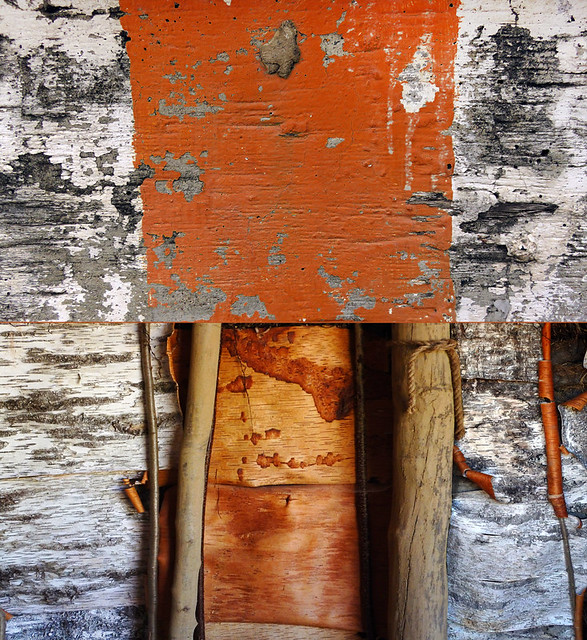 More of the Friendly Friday Challenge: Five for Five.